I've been using Family Tree Maker since Version 5 (I believe) - when was that, about 1998? One of my reasons for investigating genealogy software programs other than Family Tree Maker is the lack of a simple Ahnentafel List. Every other program can create an Ahnentafel List - defined as a numerical ancestral list in pedigree chart order, containing:

The "Ahnentafel List" is one of the basic, standard lists that genealogists know and use to keep their ancestors in good order. I carry mine in my notebook that I take to the repositories to do research - with it, and other lists or reports, I can quickly figure out if the information in a source is about my ancestor or not. 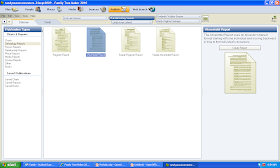 I created an "Ahnentafel Report" for myself in the screen below: 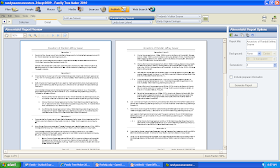 In the screen above, I selected only the name, birth, death and marriage dates and places. I was unable to deselect the children. In order for me to use this report as an Ahnentafel List, it requires me to edit the report and delete all of the children data plus some text in the Father and Mother sections.
The "Simple Ahnentafel Report" is shown below: 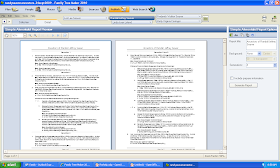 Again, the children are shown, plus the "More About Facts." This report does not satisfy my need for a simple "Ahnentafel List."
In years past, I've edited the FTM file to obtain the Ahnentafel Lists for my Father and my Mother - the edited list for my Father (no children) comes out at about 50 pages long (it started out as over 300 pages long, and took hours to edit out all of the stuff). Now, I transfer my database to RootsMagic 4 or Legacy Family Tree 7 and create an Ahnentafel List, save it to my hard drive, and print it out when I need to.
I know that other researchers need to make an Ahnentafel List, so rather than complain about it solely in this blog post, I filled out an "Enhancement Request" on the Family Tree Maker Support page with my suggestion on how to improve the situation: 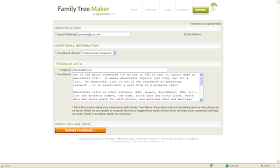 Maybe that will get some attention from the FTM software developers. I mentioned it to them verbally when I visited Ancestry.com last January, and again at the SCGS Jamboree in June and FGS Conference in September.
It's not as if this is hard to do - it is much simpler than creating an Ahnentafel Report. All of the elements are just like the Ahnentafel Report - they just need to add check boxes to select listing of children and listing of Facts other than birth, marriage and death.
[OK - rant off. There - I feel better!]
Randy Seaver at 3:33 PM
Share