"Find My Family" on ABC-TV 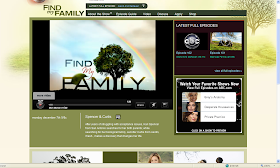 In last night's episode, two cases were solved that both featured adopted children trying to find their birth families. In the first case, titled "Wonder Moment," Ashley, adopted at birth, was reunited with the brother she knew existed, and the younger sister that she didn't know about. The show researchers found Ashley's family by searching Ohio birth records - first for Ashley, listed with no name in the index, but with an uncommon mother's surname, and they found the other two children with the same surname, contacted them and the match was made. Pretty basic research, but effective. The match would have been impossible if the surname had been more common.
In the second case, titled "Mom Moment," Jamie, a single mother of three, meets her birth mother, June, after a long search for June in the online directories. The case was solved by checking all of the places June lived and finding someone in the neighborhood that knew where she lived.
Both cases were heavy on the dramatics, the tears, and the joy of the reunions. The reunions take place on a small hill under a large "family tree" - kind of hokey, but good visuals. The people then sit and talk on a bench under the tree to get to know each other. Eventually, they meet the extended family.
Both subjects in last night's episode had searched for years in online resources, but without success. Little time was spent on the actual search for the relatives. It is difficult to tell how long the search took, and if resources unavailable to "normal" genealogists were made available.
This is a reality show, and in prime time, but was only bought for six episodes. The first episode was last week, and I missed it.
If this type of program interests you, then tune in next Monday evening to ABC-TV at 9 p.m. EST/MST/PST, 8 p.m. CST.
Randy Seaver at 7:43 AM
Share