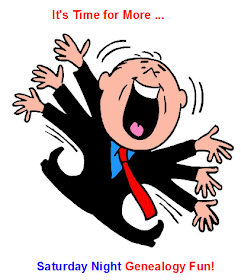 1) What was the "trigger," that started you actively researching your family history and genealogy?
2)  Tell us about it in a comment on this blog post, in a blog post of your own, or in a Facebook post.
My thanks to Jacquie Schattner for providing this challenge via email.
Here's mine:

I really think this was a 30 year process for me to get started.

1958:  I met my grandmother, Alma Bessie (Richmond) Seaver, my aunt and uncle, and a cousin for the first time.  My father came to San Diego from Massachusetts in 1940, so I grew up without knowing my paternal grandparents, aunts, uncles and cousins.  My mother had no siblings, nor did my maternal grandparents, so these were the first close family I had ever met.  Our family had exchanged Christmas cards and gifts with my father's family for years, but nobody visited anyone until the summer of 1958 when my grandmother, my aunt and uncle - Walter and Evelyn (Seaver) Wood (Evelyn was my father's sister), and the Wood's granddaughter, Diana, drove across the country to visit us (and the other California relatives) and sightsee.

1966:  I went to Boston for work, and arranged to stay with my Aunt Geraldine in Newton.  She took me out to Leominster and I met the whole Seaver family who had gathered to celebrate my cousin Peter's return from Viet Nam.  It was a great party, and now I had met most of my aunts and uncles and many cousins.  I also heard stories about my father for the first time.  I got to see the house my father grew up in at 290 Central Street in Leominster.

1968-1982:  My father's siblings started visiting us in San Diego.  Ed and Janet (my father's brother) came, cousin Joan came and stayed with my folks for awhile, cousins Diana and Beth came again on summer break, Aunt Gerry and her husband Jim Remley came, Aunt Marion came, Aunt Ruth and her husband Bowers came.  With every visit, I learned more about the Seaver family.  Linda and I really enjoyed meeting these folks and we exchanged cards and letters on the holidays.  My Aunt Marion had compiled a genealogy report on the Seaver line back in the 1950s when she was a schoolteacher, and gave it to me.  I filed it away.

1982:  Linda and I, with our two daughters now aged 6 and 8, decided on a vacation trip to New England to visit friends in Marblehead, to visit Ed and Janet in Leominster, to visit to Ruth and Bowers in Leominster, and to visit Gerry and Jim in Maine.  I had a cassette tape recorder with me, and made an audio tape with Uncle Ed one day about his life and the Seaver family.  Ed and Janet took us to Salem, N.H. to visit the Soule cousins at their lake cabin.  Gerry and Jim had a cabin on Lake Cobbosecontee and we spent a week in the woods - Jim took us boating and fishing and we swam in the lake.  We had a wonderful time the whole three weeks we were gone.

1983:  My father and mother had hoped to go to New England to visit the family in the summer of 1982, but they were both diagnosed with cancer and started treatment.  Ed and Janet, and Gerry and Jim, visited.  My dad died in May 1983, and I really regretted not talking more to him about his life and family stories.

1983-1988:  Life went on, I was working hard and traveling a lot, the girls were playing softball, and I was immersed in my hobby of DXing (listening to the radio for distant stations).  I had become a radio wave propagation expert over the years.   I didn't think about family history a lot, but I learned to use my IBM PC.

1988:  I finally read Roots, and then watched the TV series in reruns, and was entranced.  I did research and analysis for my job, and I was bored with my current hobby, so I thought "Why don't I do some genealogy research?  It can't be that hard, and it shouldn't take long."

I gathered what I knew, found Aunt Marion's report, recalled some of the stories I had heard from the aunts and uncles (especially that "Grandma Seaver was descended from Peregrine White of the Mayflower"), and contacted the aunts, uncles and cousins to tell them I was starting and asked them to provide information about their families - names, dates, places, etc.  By this time, Aunt Gerry was the expert on who was who in the family.  She made three cassette tapes about her life and family memories (having organized her thoughts over several months) and sent them to me in the mail.  I painstakingly transcribed them.  I started a "Seaver-Richmond Family Newsletter" in 1988 (I started with 6 pages, it eventually became 16 pages) and sent it for Christmas for the next 25 years to all of the Seaver relatives.  I included family news, family photographs, and information about our Seaver and Richmond ancestors.

1990:  This was Ed and Janet's 50th wedding anniversary year, and I, with my brother Scott, attended the event in Leominster in early September.  This was probably the last "big" meeting of the Seaver family, as the aunts and uncles had spread to Arizona and Florida, but many of my cousins were still in New England.  The party was in Sterling, the church service was in Leominster.  I tried to summarize the research to date at the after-party in the hotel, but I'm not sure that everyone cared.  Scott and I were invited to Salem to stay with Diana's family, and we had a lot of fun meeting and sharing our lives there.  Scott and I also took a research trip down to Putnam, Connecticut where the Richmonds were from, and we met a Richmond cousin and saw the family farm (which had been sold recently).

Starting in 1988, I went to the San Diego Family History Center every Saturday, and to the San Diego and Chula Vista Public Libraries, to search for information in books and periodicals.  I soon graduated to microfilms at the FHC!  I obtained Personal Ancestral File, entered all of my data and the new data as it came in.  I joined Prodigy network on the computer in 1992 and really enjoyed their boards, making friends and finding cousins.

Linda and I went to New England to visit family without our girls in 1991, 1994, 1995 and 1997 and I did research at NEHGS, RIHS and smaller libraries,  and we visited more ancestral towns and homes and cemeteries, in addition to seeing the families still there.  We also visited Aunt Marion in South Carolina and Aunt Gerry and Aunt Ruth in Florida in other years.

Then the Internet came along, Family Tree Maker, Ancestry.com, RootsMagic, and blogging.  I started speaking and teaching in 1996 and haven't stopped since then.  I've never stopped learning.

So it was a journey of 30 years or more to get to 1988 to start the research, and it's been another journey of 28 years to get from the start of my research to the present family tree and family history.  I have really enjoyed the ride, and look forward to new genealogy finds and experiences every day!

Information about the Pray family was obtained from:

I don't think any researcher has found information about Mary LNU.  I haven't.

Occasionally, I go looking for interesting newspaper articles about persons with my ancestral surnames.  I found an interesting one today on GenealogyBank: 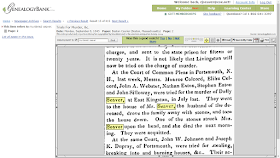 "At the Court of Common Pleas in Portsmouth, N.
H., last week, Messrs. Monroe Colcord, Elihu Col-
cord, John A. Webster, Nathan Eaton, Stephen Eaton
and John Silloway, were tried for the murder of Dolly
Seaver, at East Kingston, in July last.  They went
to the house of Mr. Seaver, the husband of the de-
ceased, drove the family away with stones, and tore
the house down.  One of the stones struck Mrs.
Seaver upon the head, and she died the next morn-
ing.  They were acquitted."

Elisha Seaver is my 4th cousin, six times removed, according to my RootsMagic family tree program.

The perpetrators were acquitted.  I often wonder how history would be changed if incidents like this had not occurred.  Dolly (Carter) Seaver might have lived a longer life, and enjoyed having grandchildren.  Her daughter, Adeline (Seaver) Davis had married in June 1845.  Did this event affect the six young men who did this offense?  Did it straighten them up, or did it lead to a life of crime?  We will likely never know.