Come on, everybody, join in and accept the mission and execute it with precision. Here's your chance to sit on Genea-Santa's lap (virtually) and tell him your Christmas traditions.

Pauleen (Cassmob) who writes the Family history across the seas blog started a Christmas meme in 2012 - see Deck the Halls - 2012 Christmas GeneaMeme.  So we will use that for SNGF this week (since very few readers did it in past years!):

1)  Copy and paste the meme questions into your blog or word processor, and then answer the questions.  You could use short statements, long paragraphs or provide a link to one of your earlier posts.

3)  Be sure to leave a comment on Pauleen's blog post about your entry in this Christmas 2016 Geneameme.  She'll be surprised!

Here's mine (questions in green, answers in red):

Since I had Mary's surname, I looked for Weavers who resided in Portsmouth and Newport in the 1660-1700 time frame.  I found Clement and Mary (Freeborn) Weaver married in about 1645 and resided in Portsmouth, and had a daughter Mary.  WikiTree.com has a decent amount of information about this line - see Weaver-203 and his wife Freeborn-5.  However, no spouse is provided for Mary Weaver, wife of Daniel Pearce, and the birth dates are different by 9 years.

I note that there are several references to the Clement Weaver line in New Englanders in the 1600s by Martin Hollick, and will pursue those when I get to a good genealogy library.

I received 12 new cousin relationships on the We're Related mobile app this week, which is based on Ancestry Member Trees.  The new relationships, and my initial evaluation of them, are: 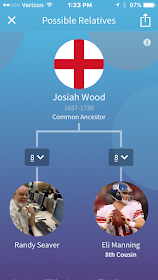 Bethel and I compared notes, and we think this relationship is Likely. 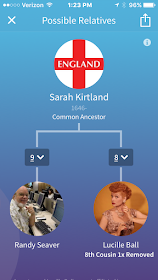 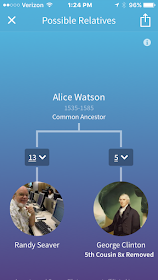 The app has added three generations to my immigrant ancestor Ralph Smith (1612-1685).  My judgment is that this relationship is Doubtful.

Kim's line to Mary Wight is through daughter Anne Ellis (1655-????).  I show Mary Wight married Thomas Ellis in 1657, and don't show Anne as a daughter.  My judgment is that this relationship is Doubtful. 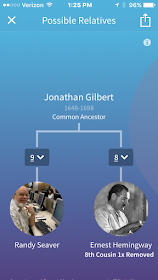 The app shows my line to Jonathan Gilbert through the parents of my brick wall ancestor William Knapp (1775-1856), adding 5 generations to my tree.  My judgment is that this relationship is Wrong without even looking at Hemingway's line. 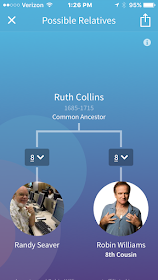 My research shows that Ruth Collins had only one child, my Ruth Graves (1711-????) and died before 1715 when Thomas Graves married (2) Ruth Taylor.  I don't show a Sarah Graves (1715-1773) for Thomas and Ruth (Taylor) Graves, which is Robin's line.  My judgment is that this relationship is Doubtful. 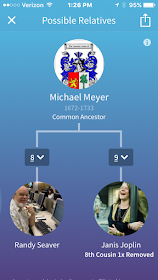 The app shows my line going through my brick wall ancestor Catherine Ruth (1770-1813) and back three more generations to Michael Meyer (those three generations are not in my tree).  My judgment is that this relationship is Doubtful.

My count is up to 90 famous or Facebook cousins provided by the app.  This week, my judgment is that only  three of the 12 cousin relationships are Probable or Likely.
I will say it again:  My biggest problem with this We're Related app is that it thinks it knows my ancestral lines better than I do, and adds one to five generations to some of my end-of-line ancestors.  They may be right -- I don't know -- and can't really find out because they provide no source material to back up their assertions.  If there was authoritative information for my end-of-line ancestors, I would add it.  None of the "Doubtful" or "Wrong" relationships have been convincing to me yet.

Over 285,000 new records are available to search this Findmypast Friday including;

Containing over 10,000 records, British Army discharges, 60th Foot 1854-1880, will allow you to find out if your ancestor served in the King’s Royal Rifle Corps. This collection of discharge records will allow you to uncover their service number, rank, and the reason for their discharge.

The 60th Regiment of Foot saw action in the Seven Years War, Napoleonic Wars, and Peninsular War. They have served in India, Burma, Afghanistan, China, and South Africa. The men found in these records most likely fought in The Indian Mutiny (1857-1859), in Canada during the Fenian raids (1866-1867), and The Zulu War (1879).

Middlesex War Memorials contains over 21,000 transcripts of memorials from over 40 parishes across the English county of Middlesex. The collection lists the names of soldiers who died while on active service between 1845 and 1998 and covers 13 conflicts.

Each record will provide you with a transcript of the individual entry from the war memorial, as well as a full transcript of all the names that appeared alongside your ancestor. Each transcript will reveal the conflict they served in, where and when they were killed, a brief description and any additional notes. Transcripts also include links from the West Middlesex Family History Society providing greater detail about the memorial such as the memorial’s location and explanations of abbreviations.

The Queensland Passports Index 1915-1925 is an index of passport registers containing over 13,000 names. The original registers were compiled by the Collector of Customs, Brisbane, and are currently held by the National Archives of Australia. Each record includes a transcript that will reveal the year the record was taken, your ancestor’s address, the date they applied for or renewed a passport and where their intended destination.

Depending on the period covered, the registers themselves may include additional information such as passport numbers, warrant numbers, remarks and additional dates associated with the issuing of passports, and occupations. Remarks may include details about soldiers returning home from the Great War.

Explore the only surviving records from the 1841 census of New South Wales. Containing just under 11,000 names, this collection includes both fully searchable transcripts and scanned images of the original household returns, affidavit forms, and abstracts of returns that will allow you to discover where your ancestors were living in 1841.

Images of the original forms may occasionally provide you with additional information or insight such as your ancestor’s religion, occupation, or civil condition. The amount of information included will vary depending on the type of document.

Over 13,000 records have been added to our collection of British Histories and Reference Guides. The collection consists of 65 volumes on genealogy, heraldry, palaeography, geography, and more. The details gleaned from these titles will provide you with the contextual information you need to create full profiles of your ancestors and the lives they led. They will add quality to your family history and your overall understanding of British genealogy.

The subject matter varies greatly in this large collection of publications. A full list of all titles included can be found at the bottom of the search page.

Disclosure:  I am a Findmypast Ambassador and receive a complimentary subscription from Findmypast.