(Photo courtesy of footnoteMaven)
Come on, everybody, join in and accept the mission and execute it with precision.
1) Answer these questions:
a) Did you ever send a letter to Santa Claus?
b) Did you ever visit Santa and "make a list?"
c) Do you still believe in Santa Claus?
d) When did you find out "the truth" about Santa Claus?

a) Did you ever send a letter to Santa Claus?

I don't think I ever did send a letter.

b) Did you ever visit Santa and "make a list?"

We visited Santa Claus every year down at the Marston's Department Store in downtown San Diego where my grandfather worked for 55 years. I think we "made a list" sometimes, especially as we got older and the wanted gifts became more complex. My recollection of visiting Santa is one of awe - this really big fat person in a red suit with a long white beard, who flies around the world in a sleigh pulled by reindeer, who goes down chimneys to leave gifts for children, all in one night - I knew the story and didn't question it for a long time (being a pretty smart kid, I guess). 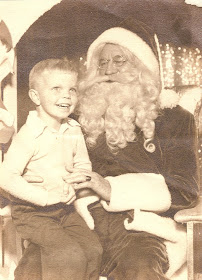 c) Do you still believe in Santa Claus?
They say that in the first part of your life, you BELIEVE IN Santa Claus. In the second part of your life, you DON'T BELIEVE IN in Santa Claus. In the third part of your life, you ARE Santa Claus, and in the last part of your life, you LOOK LIKE Santa Claus. In my case, I have all four of these attributes ... still.
The magic of Santa Claus in a child's eyes is priceless. Everybody eventually FIGURES OUT that SC is a figment of imagination - why do we fool our children like that? I love giving gifts to my wife, children and grandchildren, especially secret gifts. I've had a beard for 42 years, been practicing my "ho-ho-ho's" forever, but am working on reducing the belly. I still believe ... irrational, isn't it?
I love going to the shopping center, and sitting on a bench near Santa's little hut and watching the little ones go up and talk to Santa. Three years ago, one little boy waved at me on the escalator the other day - he knew! I've thought about being a "store Santa," but doubt if I ever will.  I even had an offer two years ago to be a "store Santa" - a guy in line at the Padres game invited me to join them!  Then there's my 6-year old grandson, Charlie, who calls me "Grandpa Ho-Ho-Ho."
d) When did you find out "the truth" about Santa Claus?
We lived on the second story of a two-story house at 2119 30th Street in San Diego from the time I was 4 until I left home in 1968 at age 24. The house did not have a fireplace, so my brother Stan and I could never figure out how Santa Claus could bring the presents under the tree. Did he come in the window? Did Dad leave a key or leave the door unlocked?
My maternal grandparents, Lyle and Emily Carringer (“Gram and Gramps”), built a beautiful home on Point Loma in 1951, and Christmas Eves were spent there for many years – and it had a fireplace! Our stockings were hung there in hopes that Saint Nick would fill them to the brim. Before bedtime, my grandmother would lead us in Christmas carols while we lay in bed – it was a wonderful way to fall asleep, and is one of my most cherished memories of her (my eyes tear up every time I think of this! they just did again).
Santa was always good to us, probably because, in retrospect, we were usually pretty good boys – mischievous but not criminal, loud but not abusive, whirlwinds but not destructive. We usually received toys that were all the rage of the day, plus the usual boring clothes, and fruit, candy and small toys in our stockings. The most memorable gifts were the "good" toys, of course. BB guns and Davy Crockett coonskin caps in 1954, Flexible Flyers (sleds on wheels) and a baby brother in 1955, bicycles in 1956.
Of course, Santa Claus isn’t mysterious forever. The Point Loma house had a two car garage that my grandparents had filled with generations of stuff – it was a wonderful place to hide, explore and search. We found the bicycles in the garage before Christmas in 1956, but didn’t tell anybody else. Sure enough, on Christmas morning they appeared by the fireplace and Christmas tree marked “from Santa Claus.” Aha! So, now we knew, but being rather smart astronauts we didn’t tell the folks – why kill the golden goose?
==============================================
The URL for this post is:  https://www.geneamusings.com/2020/12/saturday-night-genealogy-fun-your-santa.html
Copyright (c) 2020, Randall J. Seaver
Please comment on this post on the website by clicking the URL above and then the "Comments" link at the bottom of each post.  Share it on Twitter, Facebook, or Pinterest using the icons below.  Or contact me by email at randy.seaver@gmail.com.
Randy Seaver at 12:07 PM 5 comments:
Share

Added and Updated Ancestry.com Record Collections - Week of 5 to 11 December 2020

The following record collections were listed on the Recently Added and Updated List on Ancestry.com during the period from  5 tp 11 December 2020: 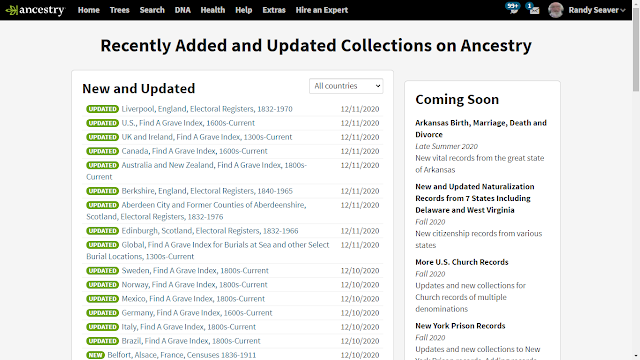 Added and Updated FamilySearch.org Record Collections - Week of 5 to 11 December 2020

As of 11 December 2020, there are 2,933 historical record collections on FamilySearch (an increase of 3 from last week): 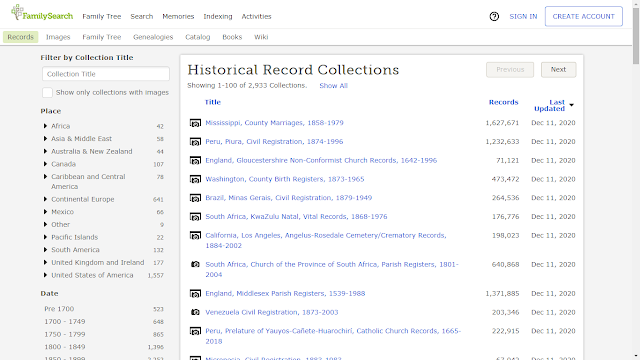