"I Am My Own Grandpa"

There aren't really many songs with a genealogy theme. The most well-known is "I Am My Own Grandpa" written by Dwight Latham and Moe Jaffe, and performed by several artisits in the 1950's and 1960's, including Lonzo and Oscar and Homer and Jethro. The lyrics are:

"I Am My Own Grandpa"

Many many years ago, when I was twenty three,
I got married to a widow, who was pretty as could be.

This widow had a grown-up daughter, Who had hair of red.
My father fell in love with her, And soon the two were wed.

This made my dad my son-in-law, And changed my very life.
My daughter was my mother, For she was my father's wife.

To complicate the matters worse, Although it brought me joy.
I soon became the father, Of a bouncing baby boy.

My little baby then became, A brother-in-law to dad.
And so became my uncle, Though it made me very sad.

For if he was my uncle, Then that also made him brother
To the widow's grown-up daughter, Who, of course, was my step-mother.

Father's wife then had a son, Who kept them on the run.
And he became my grandson, For he was my daughter's son.

My wife is now my mother's mother, And it makes me blue.
Because, although she is my wife, She's my grandma too.

If my wife is my grandmother, Then I am her grandchild.
And every time I think of it, It simply drives me wild.

For now I have become, The strangest case you ever saw.
As the husband of my grandmother, I am my own grandpa!!

When I played a tape of this at my genealogy society, I also showed the home-made pedigree chart below and pointed out each relationship - it all finally made sense! 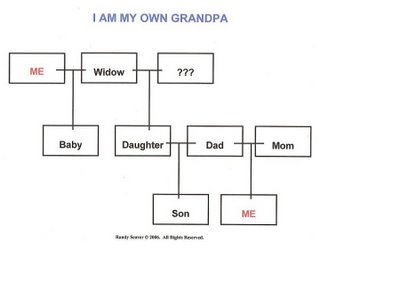