This is Part 3 of my 2004 genealogy vacation tales - see the first two parts below. We left Cooperstown NY in the afternoon, drove west on US 20 to Syracuse, then north to Jefferson County NY. Jefferson county is at the east end of Lake Ontario and the largest city is Watertown. The motel had a nice pool area (which Linda enjoyed) and was near downtown Watertown and was just off the freeway.

I visited two repositories – the Flower Library in downtown Watertown, and the South Jefferson Historical Society in Adams.

At the Flower Library, there is a small public section for genealogy, plus a closed section with more genealogy materials (which opened at noon). I found some great maps in the public section, and then visited the closed section after lunch. The Jefferson County Genealogical Society volunteers there are available 6 days a week. They brought out 8 folders of Smith data and one folder of Bell data. One half of the folder contents were newspaper obituaries collected over time, and the other half was correspondence to and from the genealogy society from researchers. Unfortunately, I didn’t find anyone else searching for my Ranslow Smith. I did get a copy of an 1860 plat map for Henderson, and some Bible records for a Lyman Smith family that a correspondent of mine will be interested in. They also had the book of "Old Houses of the North Country", and the Ranslow Smith house in Henderson was listed.

At the South Jefferson Historical Society in Adams, there was an alphabetical surname listing of cemetery records, and I obtained Smith and Bell. They also had handwritten family group records gleaned from the county history books and records. The librarian here was very helpful and friendly. 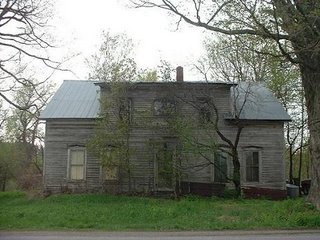 Then it was off to Henderson to find the Ranslow Smith house, which supposedly has “R. Smith 1839” carved in the fireplace mantel. I found the house, and took some pictures (see the one to the right), but nobody was home to show me the mantel. It looks really old, doesn't it?

After two nights, we left Watertown and headed north into Ontario, then west along the north shore of the Lake to Toronto. I'll post Part 4 tomorrow.
Randy Seaver at 3:56 PM
Share