America means "Freedom for All"

Eleven score and eleven years ago, the Founding Fathers, representing 13 separate small colonies hugging the east coast of North America, declared independence from a tyrannical kingdom ... in a Declaration of Independence, declared on 2 July 1776 and adopted by the Continental Congress meeting in Philadelphia on 4 July 1776. 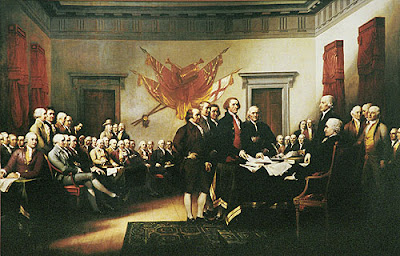 The most important sentence in this magnificent document was that:
"We hold these truths to be self-evident, that all men are created equal, that they are endowed by their Creator with certain unalienable Rights, that among these are Life, Liberty and the pursuit of Happiness..."
Not every resident in the colonies agreed with this Declaration, but, after 6 years of bitter conflict in which the colonists rarely won a battle, a new country was born. It took time to get the government structure right, with a Constitution and a Bill of Rights, but the result shook the world order to its very foundations.
I thank God for the colonists who made this happen - from the New England farmers who rallied to Lexington and Concord on April 19, 1775, the citizens and immigrants who fought throughout New York, New Jersey, Pennsylvania, into Virginia and the South, until the surrender of English forces in 1781 at Yorktown.
And I thank God for the Founding Fathers (and the mothers, too) - for the intelligence, wisdom, fortitude, and daring of George Washington, Thomas Jefferson, John Adams, Benjamin Franklin, and all of the signers of the Declaration.
The resulting country, with its institutions and society, was, and still is, imperfect. Some institutions and traditions were evil and long-lasting. It took 87 years to abolish slavery (thank you, Mr. Lincoln), and many more decades for the descendants of African migrants to obtain equality of opportunity. The treatment of the "Native Americans" - who migrated from Asia in prehistoric times, was terrible and long-lasting.
My own ancestry is filled with farmers, blacksmiths, laborers, housewives and shopkeepers of English and German ancestry. My latest immigrant ancestors came from England in 1840 and 1855. My latest German-born ancestors came in the 1750's. I don't have the "real" immigrant experience (say from the 1850 to 1920 time period) in my ancestry, and I feel a bit "cheated" that my ancestry is not as diverse (or inspiring or interesting) as that of others. Oh well, I didn't choose my ancestors! But I am proud that they took the actions they took throughout the history of our country.
Over more than three centuries, the country has "filled up" with immigrants from every part of the world - from Europe, Africa, Asia, North and South America. Why did they come? Most came intentionally - because they thought that "America" was the best hope and opportunity for a person to work hard, earn a living, raise a family, obtain education for their children, own property or a business, enjoy peace and security, and live a happy and fulfilling life. And they still come today for essentially the same reason - for the opportunity for life, liberty and the pursuit of happiness.

Thank you to Mr. Washington and his army, to Mr. Jefferson and his fellow signers, and to the colonists who fought the battles through very hard times - for a job well done. It took awhile to achieve, it is still imperfect, but it is still the best hope for mankind - FREEDOM to be an individual in a peaceful society that respects every person's inalienable rights within laws generated by the representatives of the citizens of a republic form of government.

To me, "America" means "Freedom for all" - not just in the United States, but, hopefully and eventually, in every country of the world.
Randy Seaver at 3:54 PM
Share