I spent several hours on Friday looking through the photographs that Linda's brother has at his house. He has the photos from his parent's collection and from a cousin's collection. Unfortunately, most of the cousin's collection is not labelled and there are many interesting photos that we don't know who the people are. In years past, Paul has made copies of the important family photos and given them to Linda.

After reviewing the photos, I scanned about 40 of them into Paul's computer, organized them a bit and labelled them in the file name, and copied them to my flash drive. Then I copied from the flash drive onto my laptop.

The most interesting photograph is of their grandmother's family cooking on the streets of San Francisco in front of their house after the 1906 earthquake. Their grandmother is Edna McKnew, on the far left in this picture. The people in the picture are, from the left, Edna McKnew, Leland McKnew, Elijah McKnew, Belle McKnew, Jane McKnew and May McKnew. 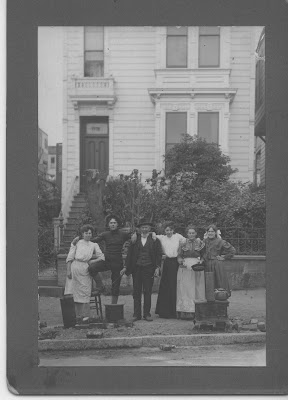 This house was at 4135 19th Street in San Francisco. They were enumerated in the 1900 census in this house. We think that the house address system may have changed over the years - we can't find this particular house.

Paul rescued a large framed copy of the lower part of this picture when their grandmother died in 1974 - he found it in the trash can. He then had a copy made, put it in a nice large frame, and the photograph hangs in our family room - their grandmother watches everything we do, and I'm sure that she enjoys seeing our grandchildren play, learn and love there. She was one of the sweetest people I've ever known.

It was another good genealogy day - we had fun looking at the photos, talking about the people, and I enjoyed the scanfest today.
Randy Seaver at 12:06 AM
Share