The Waldseemuller Map from 1507

From the Wikipedia article at http://en.wikipedia.org/wiki/Waldseemüller_map:

The Waldseemüller map, Universalis Cosmographia, is a wall map of the world drawn by German cartographer Martin Waldseemüller and originally published in April 1507. It was one of the first maps to chart latitude and longitude precisely, following the example of Ptolemy, and was the first map to use the name "America". Waldseemüller also created globe gores, printed maps designed to be cut out and pasted onto spheres to form globes of the Earth. 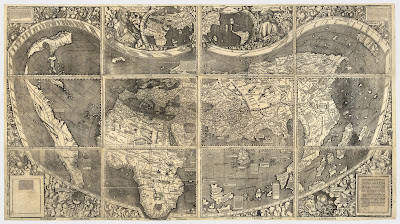 The wall map consists of twelve sections printed from wood engravings measuring 18 x 24.5 inches (46 x 62 cm). Each section is one of four horizontally and three vertically, when assembled. The map uses a modified Ptolemaic coniform projection with curved meridians to depict the entire surface of the Earth.
Cool map. Read the whole thing - I'm amazed by the detail involved. And puzzled by some of the large errors in East Asia. I don't think Australia is shown either.
Randy Seaver at 8:36 PM
Share