I posted this picture back in October 2006 here. Then, I didn't have the actual picture in my hands. I just found it today while digging through my box of Carringer treasures. The writing on the back solves a mystery - who were her parents? 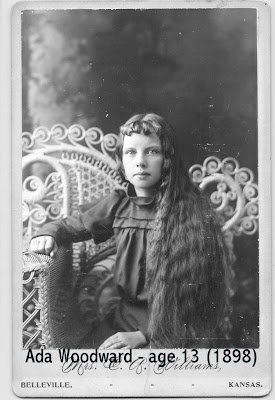 One of the pictures in the family collection is of Ada Woodward, age 13, taken in November 1898 - according to the handwriting on the back of the picture.
Look at the long hair. Look at the eyes. Look at the face - absolutely beautiful. Stunning in fact.
The writing on the back of the picture says:
"Ada Woodward, 13 years old, Nov 1898.
"Nellie Woodward's girl, her father Charlie Woodward played organ at our wedding in Wano Kan 1887, Sep. 11th. Her brother Gene was a little older, after they went away from there he died of Dyptheria."
In the 1900 census, she was age 15, and resided in Belleville, Republic County, Kansas with her grandparents, Frank and Celia Munger, along with her sister Nellie, age 10.
So now I know the names of Ada's parents - and now I wonder what happened to them. Nellie (Redfield) Woodward was a daughter of Celia (Vaux) (Redfield) Munger, as was her sister Ada Redfield. Charles Woodward is a total mystery - he may have been a son of James and Mary (Vaux) Woodward - Mary was Celia's sister. But there is a Frank Woodward in Belleville, Kansas on the same census page as the Munger family - Charles may be their son. If they died in Belleville, then there may be a newspaper clipping or a cemetery plot there.
I don't know what happened to beautiful Ada Woodward. I hope that she had a wonderful life and passed on the genetic makeup that her Redfield and Vaux ancestors passed to her.
I keep learning this lesson - "write down everything you find in a permanent place so that you don't have to keep looking for it!" The problem is, of course, once you write it down then you have to remember where you put it. I try to put everything I can into the notes in my database, but I am not 100% successful in this effort!
Randy Seaver at 10:10 AM
Share