David Devier Carringer was born 19 August 1889, in National City, California to Austin and Della (Smith) Carringer. He was named for his grandfathers - Devier James Smith and David Jackson Carringer.

The San Diego Union announced in the August 24, 1889 edition that:
"Mr. and Mrs. H.A. Carringer rejoice in the arrival of a bright faced boy, who tips the scales at nine pounds."

This picture shows baby Devier at two months of age. 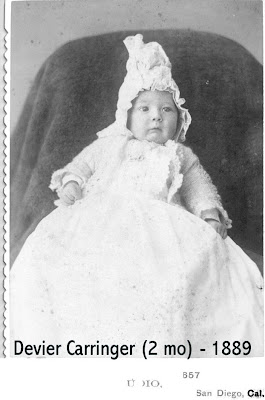 The joy turned to sorrow when Devier suddenly died on May 10, 1890. A remembrance card with gold lettering on a black background is shown below. 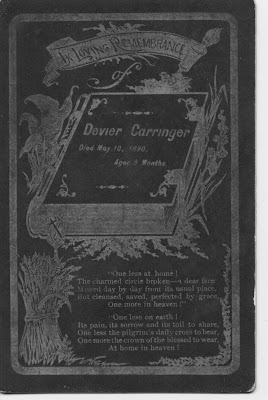 "One less at home,
The charmed circle broken -- a dear face missed
day by day from its usual place.
But cleansed, saved, perfected by grace,
One more in heaven.

"One less on earth,
its pain, its sorrow, and its toil to share.
One less the pilgrim's daily cross to bear.
One more the crown of the blessed to wear,
At home in heaven."

The family archives include several letters from the extended Smith family in Kansas and the extended Carringer family in Pennsylvania that try to reassure the family that it was God's will. The death of baby Devier apparently caused Austin Carringer to renounce his Christian faith.
Randy Seaver at 12:01 AM
Share