I lucked out and dodged the rain today - I got to do some genealogy research at the New York Public Library. Linda didn't want to go out, so I braved the subway again and found my way to Grand Central Station and walked the three blocks to the NYPL at 5th Avenue and 42nd Street. When I arrived there, it looked like this: 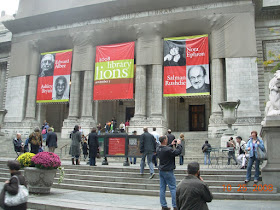 This is one of those buildings with lots of marble floors, tall square columns, many hallways, many rooms (each with a number), and a real "old world" feel to it. The Irma and Paul Milstein Division of United States History, Local History and Genealogy is in Room 121 on the first floor. Here is the entrance to the Reading Room: 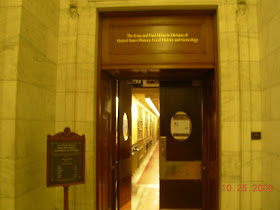 There is a microform room nearby, which has the copy card machine (buy one, and load it up) and the microfilm and microfiche machines.
In the Reading Room, you look up items in the NYPL catalog on the computer, fill out a call slip, hand it in to the staff, and wait just two or three minutes for the item to be delivered at your table spot. The staff is very patient, friendly and helpful, and expert at what they do. Here is the view of the computers and the staff area. 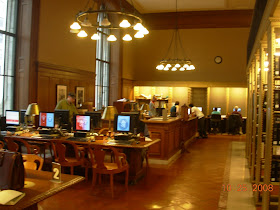 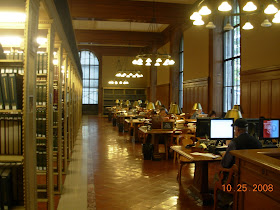 The "classical" library setting - book shelves and tables for researchers - is remarkably small. There are about 30 table spaces for researchers, and the open shelves have general research books, New York City records, periodicals, and some local history books. All of the other books and microforms in the catalog are in closed stacks - you do the call slip routine. It was not onerous.
To copy something from a book, you need to buy a copy card. They cost 30 cents, but you have to put $1.00 from a bill on the card. I didn't have a $1 bill, so I had to go to the opposite corner of the building to get change (in a machine), then come back and load my card. The staff doesn't allow books older than 1923, or books in poor condition, to be copied. Of course, knowledgeable researchers know that most pre-1923 genealogy and family history books are available in digital format.
I imposed on one of my neighbor researchers to take this picture of me at my "place" - Table 3, Seat 24: 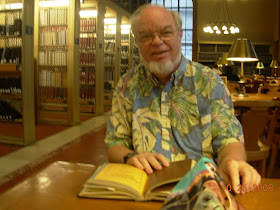 I had hoped to find the book Colonial Families of Long Island, New York and Connecticut Being the Ancestry & Kindred of Herbert Furman Seversmith, by Herbert Furman Seversmith, FASG, published Washington DC, 1953. The NYPL had 6 volumes of it, and I checked out Volume 4, which contained information about my Lewis family. Unfortunately, it did not have information on the LaTourette family of Long Island. I copied the table of contents for all volumes and the Lewis information.
Next on my list was the LaTourette family - I copied pages from LaTourette Annals in America, by Lyman E. LaTourette, LLB, MA, LLD, 1954. This small book seems to be the only one available for this fmaily.
I checked Martin, Putman, Knapp, Seaver, Bresee, Scism and a bunch of other surnames and didn't see anything that I hadn't seen before. Then I remembered my Jones family of the 1600's in Huntington LI that went to Elizabethtown and Woodbridge NJ in the late 1600's. I found a book The Long Island Ancestry of William Jones, of Woodbridge, N.J. by Oliver D. Drake, reprintred from NJHQ 44:77, April 1946. An interesting book, but no mention of my Jeffrey. Drat. I hate it when that happens.
I recalled that my John and Sarah (Martin) Putman had lived in Wantage NJ for some years, so I searched Old Sussex County Families of the Minisink Region, by Charles Edgar Stickney, a 1988 reprint by Virginia Alleman Brown. This had an article with a Martin family (but no Mulford, Putman, Weiser, Morrison, Kinnan, etc. - the other families associated) which I copied.
In three hours, I got quite a bit done in resources that I might not find in a San Diego area library.
My observation was that very few researchers were working in the closed stack books, and hardly anyone was browsing in the open stacks. There were a few researchers in the microform room using the film and fiche machines. Perhaps 80% of those in the genealogy library area were on the Internet in the free-to-access databases.
It was raining when I left the NYPL feeling good about my day. I ducked into the Bryant Park subway station right by the library and caught the 7 train to Queensboro Plaza, where I had to go outside and walk three blocks to the R train. I was back by 4:30 and we went to an early dinner at Pop Diner. They have a 16-ounce Angus Ribeye steak that is great!
Randy Seaver at 4:14 PM
Share