Whitmanville is a fairly small cemetery, and has mostly older graves. The entrance from the road looks like this - you can drivei nto them iddle of the cemetery if you want to: 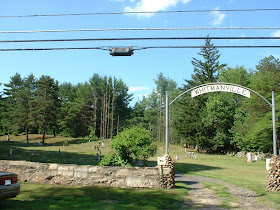 Here is a view of the Seaver monument from the center of the cemetery. 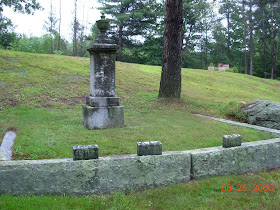 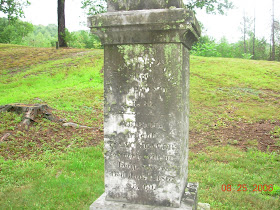 It is difficult to read the inscriptions. They read:
Benjamin Seaver
died May 25 1825
AE. 33
Abigail
wife of
Isaac Seaver
formerly wife of
Benj. Seaver
died Jan. 4 1867
AE. 69.
Benjamin and Abigail (Gates) Seaver are one set of my third great-grandparents. They resided in the northern part of Westminster on Beech Hill, where his grandfather Norman Seaver had built a house in the 1770's.
After Benjamin's untimely death at age 33 in 1825, Abigail married his brother, Isaac Seaver in 1832.
Randy Seaver at 8:13 AM
Share