My father, Frederick W. Seaver (1911-1983) was not the first from my family Seaver to settle in the San Diego area. His grand-aunt, Elizabeth (Seaver) Blanchard (1859-1914) came to San Diego with her husband, Frederick G. Blanchard, before 1888, and settled in the (then) booming town of National City, just south of San Diego along the bayfront (and just north of the now booming city of Chula Vista).. 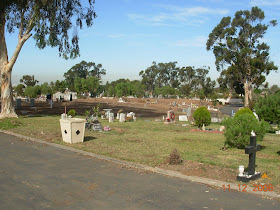 The handsome granite stone is on the western edge of the cemetery, and looks like this (viewed from the east): 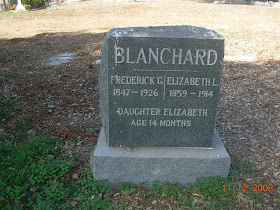 This is the only record I have found for the daughter, Elizabeth Blanchard, who died at age 14 months. I have not found a birth or death record.
Elizabeth Lucinda (Seaver) Blanchard was born 26 March 1858 in Westminster MA, the daughter of Isaac and Lucretia (Smith) Seaver. She married Frederick G. Blanchard on 1 January 1878 in Leominster MA, and died 10 September 1914 in National City CA. I am descended from Elizabeth's oldest brother, Frank Walton Seaver, my great-great grandfather.
Frederick and Elizabeth (Seaver) Blanchard had three sons, Frederick Thomas Blanchard (born 24 September 1878 in Leominster MA, died 3 February 1947 in Los Angeles CA, married Mary Helen Webster on 21 December 1912 in San Diego County CA); Lawrence C. Blanchard (born 29 May 1888 in National City CA, married Vivienne Pettit in 1921, died 2 July 1945 in San Mateo County CA); and Kenneth L. Blanchard (born May 1891 in National City, died in late 1918 in FRANCE). I believe, but don't know for sure, that the daughter Elizabeth was the fourth child of Frederick and Elizabeth (Seaver) Blanchard - she is dead before the 1900 census (Elizabeth is listed with four children born, three living).
I discovered this gravestone by happenstance when visiting La Vista Memorial Park for the South San Diego County Graveyard Rabbit post about the cemetery. See, blogging pays off!
Randy Seaver at 8:29 AM
Share