I'm posting old family photographs from my collection on Wednesdays, but they won't be wordless posts like others do - I simply am incapable of having a wordless post.

I scanned my grandfather's (Lyle L. Carringer, 1891-1976) "Snapshots" album on 25 January during Scanfest. The photos were from about 1910 to about 1925, and were pasted onto black paper in the album. The album pages are somewhat moth-eaten around the edges and many pages were loose. I decided to take out all of the pages so that I could scan them. There are quite a few blank spots on the pages where someone has removed other photographs. I've seen many loose photos in my collection with "black paper" on the back that were probably in the album at one time.

Here is one of the photographs from the collection: 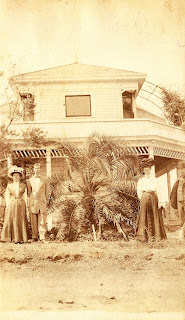 This photograph is the house located at 2105 30th Street (corner of Hawthorn Street) that my great-grandparents, Henry Austin and Della (Smith) Carringer built in the late 1890's. I posted an earlier photograph of this house before, soon after it was built, here.
There are four persons in this photograph:
* Della (Smith) Carringer - on the far left, dressed up in long dress and hat.
* Lyle L. Carringer (1891-1976) - as a young man, next to Della, wearing a fine suit and a nifty bow tie
* Abigail (Vaux) Smith - on the right of the palm tree, also dressed up in long dress and hat. Abbie is the mother of Della (Smith) Carringer, and widow of Devier J. Smith.
* an unknown male - on the right edge of the photograph. This may be Henry Austin Carringer, but I cannot tell because the photograph is unclear, even when magnified.
I've pondered when this picture might have been taken. There are no dates on the photograph front or back. I have three clues - the first is the relative youth of Lyle - he looks like a young man aged 18 to 25, has a different hair style and and is not as old looking as he was in the 1918 photograph I posted last week. The second clue is the foliage around the house, which was built in the late 1890's. The palm tree in front of the house is relatively new - perhaps only 3 to 5 years old. The trellis on the upper story to the right has quite a bit of foliage, but not as much as a 1916 photograph. The third clue is Della's dress, which looks very similar to the dress in the beach picture taken in February 1910 (dated on back) and shown here. Lyle's suit in this picture appears to be the same suit as in the 1910 photograph (but in the 1910 photo he does not have a bowtie).
My best guess is that this photograph was taken in the 1910 to 1913 time frame.
Randy Seaver at 8:30 AM
Share