Tana L. Petersen of the The Generations Network (TGN) announced yesterday on the Ancestry.com Blog that the long anticipated Family Tree Maker 2009 Source Citation templates had been implemented on the latest FTM 2009 Upgrade.

There was no explicit direction as to how to obtain the upgrade, so I just opened FTM 2009 and a notcie came up saying there was an Upgrade and I followed the directions and the upgrade quickly downloaded. Then it took FTM 2009 quite a while (I'm guessing two minutes) to start up (it usually takes only one minute or so) and I maneuvered to some source citations and sure enough, there was a way to create new source citations and edit earlier citations using a series of source citation templates based on the Quick Check models in Elizabeth Shown Mills' book, Evidence Explained.

Before I dove into this exercise, I downloaded and read the PDF that was in Tana blog post - titled 2009 Software Update (one section covers the Source Citation templates). This was a big help in getting me started.

I have a series of screen shots for my first exercise in editing an existing source citation. I chose the Carringer Family Bible for which my source citation had been:

On the [People] > [Person] screen for Henry Austin Carringer, I selected the Birth Fact, and clicked on the "Edit" (the pencil icon) on the "Sources" field in the right panel of the screen. This opened the small window, which had my earlier information in the window items, as shown below: 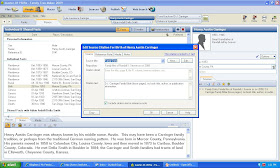 I selected the "Edit" button, and a second small window titled "Edit Source" opened for me to start the citation template process. This window has entries for "Source Template," "Author," "Publisher," etc. I needed to choose a template first, so I clicked the "Change" button on the top line: 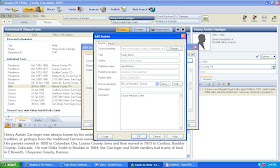 Another small window opened titled "Select Source Template" with a selection of template types. I chose "Archives and Artifacts" and then chose "Private Holdings" from the Categories box and "Family Bible Records" from the Template box, as shown below: 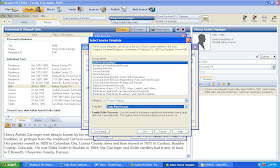 I clicked "OK" and a small window titled "Change Source Type" opened with a number of empty boxes to be filled in. The screen looked like this: 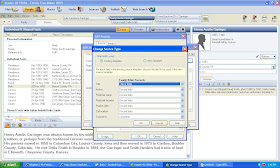 I could have added information to the boxes, but I didn't because I had no knowledge of the Bible title, author, publisher, etc. I clicked "OK" in my haste to finally complete a great source citation. A window titled "Edit source" came up with many of the same boxes to fill in, plus more. I filled them in with what I knew about each item. The screen looked like this: 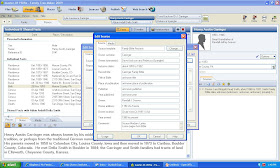 I clicked "OK" and was back to the first "Edit Source Citation" window and I added some information into the "Citation Detail" box, and eliminated the previous text from the "Citation Text" box. The screen looked like this: 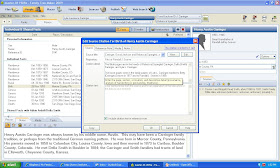 I thought I was almost done...so I clicked "OK" and was back to my [People] > [Person] screen with the Birth record highlighted, and the edited Source in the right-hand frame on the screen: 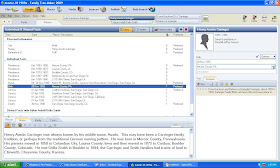 It shows only two lines on this screen - a long source citation is cut off by the window width. If I dragged the window divider to the left, more of the citation would show up.
However, I went to the [Sources] button and chose this Source and the Reference Note that appeared was:
"David Jackson and Rebecca (Spangler) Carringer, about 1853 to 1902, Carringer Family Bible, unknown title (unknown place of publication: unknown publisher, unknown year); privately held by Randall J. Seaver, Chula Vista CA 91911 USA, 1988 to present. The Bible pages are in the hands of Rebecca (Spangler) Carringer, Della (Smith) Carringer, and Lyle L. Carringer. The loose pages were in the family papers of Lyle L. Carringer handed to Betty (Carringer) Seaver in 1977 and to Randall J. Seaver in 1988."

Isn't that cool? Did I do it right? (I really hate criticism, you know, but tell me!). What should I have done to make this better?
I could have attached my images of the Bible pages to the Media tab in the Sources screen.
I could have included a transcription or abstraction in the Reference Note if I had entered them into the "Citation Text" box on one of the small windows.
I can use this master source for all of the persons mentioned in this Family Bible.
Whew! One down, hundreds more to go. It only took an hour or so for this one! I'm sure that I will get better at doing this.
I wonder if the Legacy 7 process is any easier? I'll try it soon and tell you all about it!
Randy Seaver at 1:58 PM
Share