Ephraim Sawtell was born in about 1685 in Groton, Middlesex County, Massachusetts, the son of Obadiah and Hannah (Lawrence) Sawtell. He married (1) Abigail Farnsworth on 10 April 1713 in Groton, married (2) Hannah Farwell on 15 March 1755 in Groton, and married (3) Hannah Parker on 30 September 1762 in Groton. Ephraim Sawtell died 8 October 1768 in Groton. 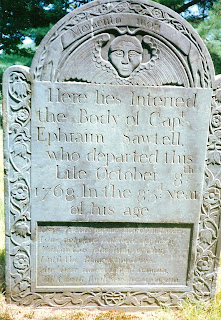 The tombstone shows a cherub's head on the top, below the words "Memento Mori."
The inscription says:
Here lies Interred
the Body of Capt.
Ephraim Sawtell
who departed this
Life October 8th
1768 In the 83d
year of his age.
"Dear friends for me pray do not weep,
I am not dead but here do sleep,
Within this solid lump of clay,
Until the Resurection Day:
And here indeed I must remain,
Till Christ shall rais me up again.
Isn't this a beautifully carved stone? There are many well-preserved stones like this in the Old Burying Ground in Groton. Transcriptions of the stones in this cemetery are provided in the US GenWeb archives here. A book (Epitaphs from the old burying ground in Groton, Massachusetts, By Samuel Abbott Green, Arthur Bruce Coburn, Published by Little, Brown, & Company, 1878) is available on Google Books here.
I don't recall where I obtained this photograph, and others from this cemetery. I may have taken them myself on a trip to New England in 1994 or 1995, and I may have obtained them from a kind correspondent who took them and sent them to me years ago.
I thought that this Ephraim Sawtell was my ancestor, but it turns out that he is a brother of my ancestor Hezekiah Sawtell (1703-1779), also of Groton. I thought that it was such a great stone that I would post it anyway!
Randy Seaver at 8:14 AM
Share