....
I'm posting old family photographs from my collection on Wednesdays, but they won't be wordless Wednesday posts like others do - I simply am incapable of having a wordless post.

This photograph is from my grandfather's photo album that I scanned during Scanfest in January: 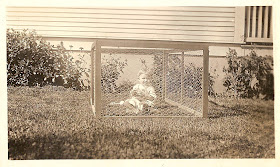 That is my mother, Betty Virginia Carringer (1919-2002) in her sturdy, well-constructed wood and screen playpen. It was probably taken outside the Lyle and Emily Carringer family home at 2052 Harrison Street in San Diego in late 1919 or early 1920.
I wonder who constructed the playpen? Her grandfather, Henry Austin Carringer, was a carpenter. Perhaps her father, Lyle Carringer constructed it. It's a simple construction, and effective. The baby could see what was happening as the world went by, and she was contained sufficiently. She could explore the grass, dirt and any bugs that she could find in her little 16 square foot domain. I wonder how long it took before she could climb out of it?
Randy Seaver at 8:52 AM
Share