Probate records, when they exist, are one of the best resources to prove relationships between parents and children, and perhaps siblings and grandchildren too.

What are probate records? See the article here for more information about Probate Records.

Each state has a different set of papers, but in Jefferson County in New York State, there are Surrogate Court record files for Wills, Letters of Administrations, Letters Testamentary, Minutes, orders and decrees, Estate Papers, etc. I think that most New York counties have a similar system.

Where do you find probate records? In paper format - at the county courthouse or a local or state archive. However, many pre-1920 probate records are on microfilm at the LDS Family History Library Catalog - you can see the Jefferson County NY Probate Records available on microfilm from the FHLC here.

I searched the Estate Papers microfilms for the first part of the L surnames yesterday, and found five files for the surnames Lamphear/Lanphere/Lanfear, etc. As an example of what can be found, here is a letter written by a son of Isaac Lanfear (only the first page shown): 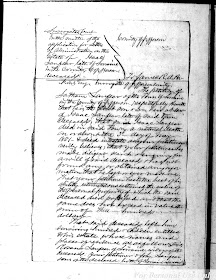 The three-page letter transcribed is:
----------------------------------
[Page 1]
Surrogates Court / County of Jefferson
In the matter of the
application for Letters
of Administration on the
Estate of Isaac
Lanfear late of Lorraine
in the County of Jefferson,
deceased
To James R.A. Per-
kins Esqr Surrogate of Jefferson County
The petition of
Latham Lanfear of the Town of Lorraine
in the County of Jefferson respectfully sheweth
that he is the eldest son & an heir at law
of Isaac Lanfear late of said town
deceased; that said Isaac Lanfear
died in said Town a natural death
in or about the 3d day of May
1851 - & died intestate as your petitioner
verily believes; that your petitioner has
made diligent search & enquiry for
a will of said deceased & has not
found any or obtained any infor-
mation that he left or ever made one;
that your petitioner has to the best of his
ability estimated & ascertained the value of
the personal property of which the said
deceased died possessed and that the
same does not exceed in value the
sum of three hundred
dollars.
That said deceased left him
surviving kindred & children entitled
to his estate whose names and
places of residence are as follows, to wit:
Rosana Lanfear of Lorraine widow of the
deceased. Your petitioner & John Lanfear
sons of the deceased, both of Lorraine aforesaid.
[Page 2]
Anna Shelmedine, wife of William Shelmedine
of Lorraine. Malinda Lanfear & Sarah
Lanfear of Lorraine. Eleanor Loveland wife
of Lester Loveland of Rodman in the County
of Jefferson. Betsey Rose wife of Chester
C. Rose of the town of Brownsville in said
County; & Polly Muzzy wife of Nelson
Muzzy of Sandy Creek in the County
of Oswego. & also Susan Kellogg
wife of Orlando Kellogg of Lorraine
all daughters of deceased & all
now living except said Susan Kellogg
who is now deceased & left her survi-
ving two children, to wit, Harvey Orlando
Kellogg & Isaac Orlando Kellog, now
living with their father Orlando Kellogg
in Lorraine & grandchildren of the deceased
& both infants under fourteen years of
age & of about six or seven
years old & have not to the knowledge or
belief of your petitioner any general
guardian; that the above named
children of said deceased who are
now living are all & each over twenty
one years of age....
and are the only surviving children
of said deceased & the above named
grandchildren & children now surviving
with said widow are the only persons
entitled to share in the personal & real estate
of said deceased & now living.
That said deceased & intestate
at immediately previous to this time
[Page 3]
of his death was an inhabitant of
said County of Jefferson & had property
therein; that your petitioner is of full
age & that said Rosana Lanfear
widow of said deceased has renounced
her right & claim to letters of Administration
upon the estate of said deceased which
renunciation is hereunto annexed in
writing signed by her & the execution thereof
duly proves that said John Lanfear
who is equally with your petitioner en-
titled to Letters of Administration upon said
estate has also renounced & waived
all right thereto as appears in his written
renunciation thereof signed by him & duly
proven also hereto annexed; that your
petitioner is informed & believes that the
Surrogate of said County of Jefferson
has sole & exclusive power to grant letters
of Administration of the goods, chattels &
credits of said intestate.
Wherefore he prays that
in pursuance of the Statute in such
case made & provided and your
petitioner will ever pray &c
Dated September 6th 1853
/s/ Latham Lanfear
-----------------------------
Source citation: Isaac Lanfear Estate Papers, New York Surrogate's Court (Jefferson County), Estate papers 1905-1945 (original records in Jefferson County Courthouse, Watertown, New York. Microfilmed by the Genealogical Society of Utah, 1967; 278 microfilm reels.); Case File L-67 (accessed on Family History Library US/CAN Film 0,527,037 (Box L 7-10 Cases, 60-104 1805-1900 by Randy Seaver on 21 July 2009).
Isn't that a great find for a descendant of Isaac Lanfear? It names all of his living children and their residences, and the husband and children of a deceased daughter.
In my case, I hoped against hope that it would name "Devier Lanfear the son of my deceased son ... Lanfear who was adopted by Ranslow Smith now residing in Wisconsin" but my hopes were dashed. Oh well.
My purposes in transcribing this Estate Paper and posting it on this blog are twofold:
1) As an example of the type of information a researcher can find in Probate Records
2) In case a descendant of Isaac Lanfear is searching for information about him that they can find this post in an online search.
This is also an excellent example of the type of record found in the Family History Library microfilms that will eventually be digitized and indexed by the Family Search Indexing project.
When records of this type are available online for searching, then many brickwall research problems will be solved. These records are available to researchers, but they are well hidden right now. It certainly seems that not too many researchers understand that they are available now or that they even exist.
Randy Seaver at 1:03 PM
Share