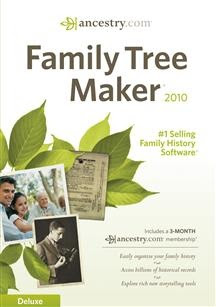 When will the latest version of Family Tree Maker, version 2010, be announced, and be available? I'm thinking that the announcement will be "soon" and that it will be available sometime during August 2009.
Those estimates are based on the Sunday morning breakfast hosted by Ancestry.com at the SCGS Jamboree where Michelle Pfister and Mark Lemonnier reviewed some of the highlights of FTM 2010 for nine wide-awake and eager bloggers. I took notes. They said that we could "tell" after July 8th... I fully expected some sort of announcement this past week, but maybe it is coming soon.

* New tools and charts that help you tell a richer story

* Better ways to organize photos and other media

* Create slideshows from the images in your tree

* Family books made from your tree

* Images scanned directly into your tree

At the breakfast, I think that Mark hit all of those bullet points. He expanded on some of them, including:

* The Plan screen in FTM 2010 will have a web dashboard and a list of family trees with statistics. The dashboard will include the user's Ancestry account and Twitter feed.

* On the Publish screen, there will be more reports and charts. Media will be added to Family Group Sheets and sources to Charts. They will offer an extended family chart (the view of your relation to everyone in the tree).

* There were many more items in the People, Places and Sources screens - all of them sound good to me. Let's see what they look like when this is released to the genealogy community.

The important thing to me is that Ancestry.com is continually improving the Family Tree Maker software. In some cases, they are "catching up" to the competition. In other cases, they are breaking new ground.

I believe that, at some point, there will be a Family Tree Maker program online so that users can do their adding, editing, noting, sourcing, etc. in the online program without a massive desktop program sitting on their desktop hard drive - in other words, "Genealogy in the Cloud." That makes a lot of sense to me, especially with Netbooks becoming so popular. I expect that such a program, and the database storage, would be offered for a price.

NOTE: If I have misstated anything above, I hope that an Ancestry.com person will let me know. While taking notes, I was still thinking about how good the breakfast was... I thank Ancestry.com for the free breakfast and the FTM briefing - it is helpful to get to know the Ancestry people and for them to get to know some of their customers.

UPDATED 13 July: I corrected my discussion of "synching" above in red. I received an email today from Michelle Pfister informing me that FTM 2008 and 2009 can already upload a Family Tree Maker file, including attached media (images, audio, video, etc.) to an Ancestry Member Tree from within the Family Tree Maker program. I must have misunderstood Mark when he discussed the "synching" of FTM 2010 to Ancestry. Michelle told me that the capability for an Ancestry member to download their tree, with attached media, from Ancestry Member Trees to FTM 2010 will be part of the FTM 2010 upgrade.
Randy Seaver at 5:24 PM
Share