With so many new users of RootsMagic 4, I thought it would be a good idea to demonstrate how to Import a GEDCOM file into the program. I downloaded a GEDCOM from www.Ancestry.com the other day (see Exporting a Tree from ancestry.com).

I have several databases already in RootsMagic 4 format, so I did a File>Close to get to a blank screen, and then closed the program. When I opened RootsMagic 4 again, I got this prompt: 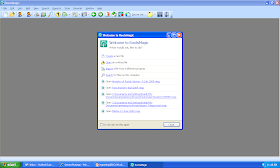 Here, I chose to "Import a File from a different program." I could also have gone to the File menu and selected "Import." In both cases, I see this screen: 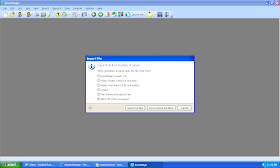 RootsMagic 4 can import files from RootsMagic (versions 1-3), Family Origins (version 4 and later), Family Tree Maker (version 2006 and earlier), Legacy (no versions given), Personal Ancestral File (no versions given) and GEDCOM (other programs). Because I downloaded a GEDCOM file from Ancestry.com, I chose "GEDCOM" and clicked on "I know where the file is" because I put it in a known place. The other option is to "Search for files." The next screen shows my list of databases where I put the GEDCOM file. I found the right file, and clicked on it and this screen showed: 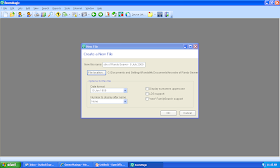 On the screen above, I am going to "Create a New File" so I input a title for my new database, clicked on the "File location" button in order to tell the program where to put the RootsMagic 4 database (the default is the "My Documents" file - I really don't want it there!). There are several other boxes to check or uncheck.
I clicked on the "OK" button and the GEDCOM Import screen came up with another box asking me "Add a new source to tell where the information in this GEDCOM came from?" with four options: 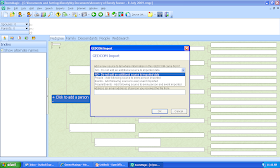 I picked "NO - Do not add an additional source for imported data." I could have said YES and a new source would have been added for each person and/or event - this may be useful if you have obtained the GEDCOM from another person.
I clicked on "OK" and the GEDCOM import began. I took this screen shot right at the end - showing that the GEDCOM file had 23,010 persons, 9,420 families, 34,360 events, 180 sources, 3,650 citations, and 0 repositories: 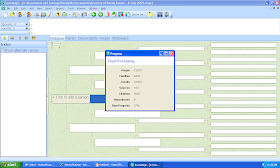 The GEDCOM import took less than 20 seconds, which is amazing to me. The RootsMagic screen opened to the Pedigree View with myself highlighted. 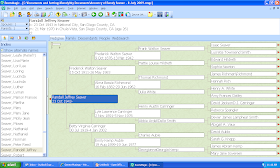 This GEDCOM import process is the most logical, fastest and easiest to use that I've encountered.
What other topics would you like me to demonstrate in this series? Tell me in Comments. Don't try to stump me...this is a basic list of tutorials, not for experts!
If you have questions about RootsMagic 4 operations, you can use the Help function in the RootsMagic program. You can also go to the RootsMagic 4 website at www.rootsmagic.com and read their Frequently Asked Questions and their Message Boards (you have to register a username and password in order to post).
Randy Seaver at 9:05 AM
Share