In this post, we will add some photographs to the database and associate them with the persons in the database.

On the "Tree" page, I found the "Photos" icon on the icon menu row: 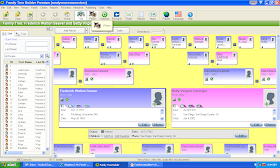 After clicking on the "Photos" icon, the "Photos" screen appeared. The list of persons in my database were in the left-hand panel. The main center panel has three tabs - Photos, Query and Import. The "Photos" tab was blank (since I have none imported yet!), so I clicked on the "Import" tab. Here I was asked to select the file folders on my computer (the program will search for all of your images if you want it to - I didn't!). I checked the "In specific folders" box and then found my Seaver family photographs in one of my file folders: 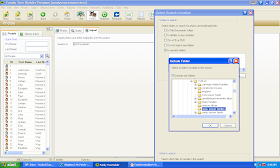 After I clicked on "OK" I had to click on "Search" on the "Import" tab screen and all of the photos in my selected file folder appeared: 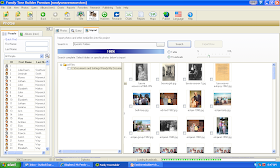 When all of the photos had been shown in the panel, I went through and selected some of them to be imported. When I was done, I clicked on the "Import Now" button and the program asked me if I wanted to move photos between photo albums: 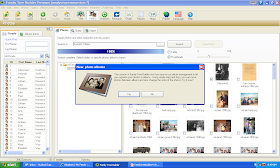 I clicked "No" because I have only this one so far. The program then went to the "Photos" tab and showed all of my selected photos in a table. The popup window says that I should associate persons in my database with these photographs, and edit the photograph information: 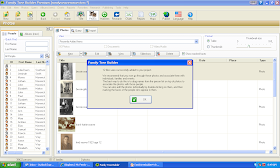 The way you associate the photograph with a person is to find the person in the alphabetical list in the left-hand panel (if you hover your mouse over the name, you can see their details - see below), highlight that person and then drag and drop the name into the "Association" field on the photo list: I did that for all of the photographs that I imported. I wanted to add information about each photograph, so I clicked on the first one - my grandmother taken in about 1960 - and clicked on the line. The "Edit Photo" screen opened and there were five tabs across the top - Info, Associations, Notes, Reverse side and Options. I filled in the "Info" items - the date and location. It appears, in the screen below, that there is a "facial recognition" feature in the software - her face, and the sleeve of her floral dress, are highlighted with a green boundary: 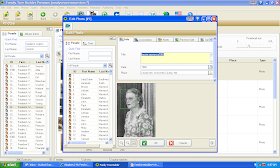 When I explored the "Options," one of the options was to turn off the facial recognition.
Having imported some family photos, I wanted to see how the program interacted with them. Back on the "Tree" view, I clicked on my grandfather, Frederick Walton Seaver, and his "Person Page" opened up. The "Photos" button at the top right indicated that there was one photograph associated with him: 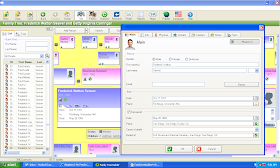 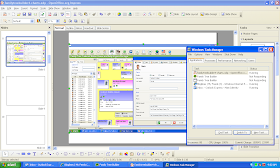 After ten minutes of w-a-i-t-i-n-g, I decided that the program was fatally hung up, so I ended it. Now I'm wondering if all of my photo importing and editing was saved.
I just opened the program again and received a message that said that my latest session was not saved, but it was backed up. I clicked on the button to recover the last session and save the information. The photo import and associations were saved, but my editing of the photographs was not saved for some reason.
Importing the photographs, associating people with the photographs and editing the photo information was very easy and intuitive. The messages from the program are very helpful. The menus are logical and easy to use. However - I am dismayed that the program hangs up when I try to see the photos of persons from their "Person Page." Is this a program flaw? Or is it a problem with my computer? It has happened several times now, even after I rebooted my computer (running Windows XP SP3), so I think that it is a program flaw. A fatal one at this point in time!
Notwithstanding, we will press on - in the next post we'll look at some of the other "Photos" buttons and features.
Randy Seaver at 9:03 AM
Share