Sometimes it is difficult to find out the married surname of daughters of our ancestral families because of the dearth of vital records or family records. We usually know the name of our own "daughter" of these people, and even her sisters' given names, but her sisters often marry and we cannot find them after they marry if we don't know the married surname.

However, the 1880, 1910 and 1920 US census records on http://www.ancestry.com/ offer a potential solution to this problem. In these databases, the parents' birthplace can be entered along with other search terms like given name, birthplace, birthyear, etc.

Perhaps the best example is my search for the daughters of Elijah McKnew (1836-1912, born Maryland) and Jane (Whittle) McKnew (1847-1920, born Australia), who lived in San Francisco CA, in the 1920 US census. I knew the daughters' first names, but wanted to see how this little test would work.

In the 1920 US Census on www.Ancestry.com (using Old Search and Exact Matches), I put in no names, limited the search to the state of California, and put "Maryland" as the father's birthplace and "Australia" as the mother's birthplace: 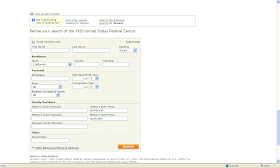 I got only 13 matches to my "No Name" search criteria: 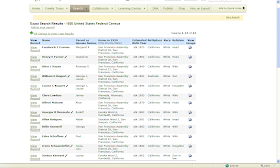 Included on that list are Alice Hayes (wife of Phineas, indexed as Rhoneas!), Belle Samwell (wife of George) and Edna Schaffner (wife of Paul). Son Alfred McKnew was also listed. all of them were in San Francisco. I also checked out a mother's birthplace of "Austria" and found daughter Gladys Rose (wife of Harry). The mother's birthplace of daughter Allethia (McKnew) Runnells was listed as "Virginia." I couldn't find daughter Lilly (McKnew) Olson anywhere!

Obviously, it helps to have a relatively rare father's or mother's birthplace (even though they are often misindexed). It is almost imperative to have a daughter's given name and approximate birthdate. But the system would work pretty well if you put in the daughter's given name, her approximate birthdate and birthplace, and just the father's birthplace (again, if it is relatively rare for the locality) in a specific state or county.

The 1880 and 1900 U.S. census on FamilySearch Record Search had the parents' birthplaces indexed but they are not yet on the Advanced Search form.

The 1930 U.S. census on http://www.footnote.com/ did not index the parents' birthplaces and they cannot be used in the Search.