I'm posting old family photographs from my collection on Wednesdays, but they won't be wordless Wednesday posts like others do - I simply am incapable of having a wordless post. So this one will be wordy...

This photograph is from the collection of pictures given to me by my mother from the four generation Smith-Auble-Carringer-Seaver archives during the 1988 to 2002 time period: 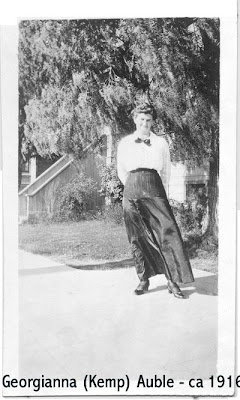 The subject of this photograph is Georgianna (Kemp) Auble (1868-1952), daughter of James Abram and Mary Jane (Sovereen) Kemp, wife of Charles Auble (1849-1916) and mother of Emily Kemp (Auble) Carringer, my maternal grandmother.

This photograph was taken in about 1916. At this time, the Auble family lived at 767 14th Street in San Diego, according to San Diego City Directories. Charles Auble fell down stairs in March 1916 and died soon after. My guess is that this picture was taken before his fall and death because Georgianna is not in mourning clothes.

I digitally captioned many of these old photographs several years ago, as seen above. For the next Scanfest, I'm going to re-scan many of these photographs at higher resolution with my new printer/scanner/copier and tag the photographs rather than add a caption to the front of the digital photograph.
Randy Seaver at 8:38 AM
Share