Mystery Monday - Finding Jane and Elijah in the 1860 Census

If we don't have the good fortune of an autobiography or a great obituary, piecing together the lives of our ancestors relies on finding bits of information about them. Typically, we can find census records, vital records (if available), city directories, immigration and/or citizenship records, military records (if they registered or served), land records, probate records, a gravestone, an obituary, and other types of records. An elusive ancestor hunt is like Forrest Gump's box of chocolates - you never know exactly what you are going to find.

I've written about my wife's great-grandparents, Elijah Pickrell McKnew (born 1836 in MD, died 1912 in CA) and his wife, Jane Whittle (born 1847 in Australia, died 1921 in CA), married in 1865 in San Francisco, California, in Solving Family Mysteries one at a time, 18 April 1906 - San Francisco - They Were There! and Finding daughters married names in census records. I had previously found them in the 1870 US Census in Township 2, Tuolumne County, California, in the 1900 and 1910 US Census in San Francisco, California. But I had not found either Elijah or Jane in the 1860 census, or their family in the 1880 census.

I found Jane in the 1860 US Census last night. Since Jane was born in Australia in about 1847, I searched for "Jane Whit*" born 1847 +/- 2 years in Australia residing in California. There was only one match - Jane White, age 13, born Australia, residing in Township 2, Tuolumne County, California. Here's the census image from Ancestry.com: 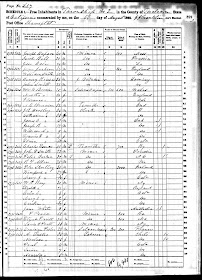 Is that the Jane I'm looknig for on line 31? Jane White (sic) is residing with the W.B. Ray family. And lookee there! Elijah Picrell (age 26, born in MD) is two lines below her! That has to be the Elijah Pickrell McKnew I'm looking for!
Naturally, this raises some questions:
* Where were Jane's parents? Here's a 13 year old girl residing in a mining community in the Gold Country of California. Jane's parents are Joseph and Rachel (Moore) Whittle, and I think that Joseph Whittle lived until 1871, dying in San Francisco. There are no Joseph Whittles (or similar names like White) born in England in about 1821 in Tuolumne County or in San Francisco (although he apparently naturalized in San Francisco in 1861) in the 1860 census (the likeliest candidate is a Joseph White, age 36, born England, in San Francisco with a 23-year-old Sarah White (born Bombay). I have no record of when Rachel (Moore) Whittle died, so I don't know if Sarah is a second wife of Joseph Whittle.
* Is Jane related to Elizabeth Ray (age 21, born in England)? I don't know, but they may be sisters. That would explain why Jane was in Tuolumne County. Perhaps her parents, or at least her mother, had died.
* Why was Elijah Pickrell McKnew listed as "Elijah Picrell?" The simple answer is that he was hiding in plain sight from the US Army that he deserted from in 1856.
I have searched several times for the Elijah McKnew family in the 1880 US Census, especially in San Francisco, without success. According to the San Francisco City Directories on Footnote.com, Elijah McKnew resided in San Francisco from 1875 on, and in 1880 resided on the South side of Nineteenth Street near Castro. I haven't been able to find him in the 1880 census yet, but now that Ancestry.com has improved their browse function, I will go search page by page for the McKnew family. If I find them, I will write another post about the search.
Randy Seaver at 8:28 AM
Share