(Not So) Wordless Wednesday -- Honeymoon Couple

I'm posting family photographs from my collection on Wednesdays, but they won't be wordless Wednesday posts like others do - I simply am incapable of having a wordless post.

Here is a photograph from the Seaver family collection handed down by my mother in the 1988 to 2002 time period: 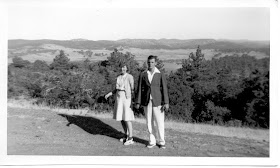 This is a photograph of my parents, Betty (Carringer) (age 22) and Frederick W. Seaver (age 30), on their honeymoon in July 1942. I believe that it was taken in Dana Point in Orange County, California.

I wonder where the pictures from my own honeymoon are? Probably in the box hiding somewhere in the garage! Yikes - another project that I don't have time to do.