It's Treasure Chest Thursday, and I want to highlight just how important death certificates can be. 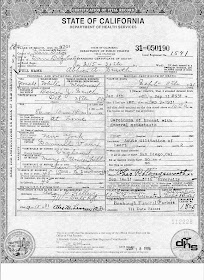 I obtained this death certificate by walking into the San Diego County Recorder's office in Chula Vista and requesting a copy of it and paying $12 for the service.

Here is what I learned from this record:

My main purpose of obtaining this death certificate back in 1995 was to determine if it named Abbie's mother - and it did. I did not know the surname "Underhill" before I obtained this record. I have no other record that provides her mother's maiden name. This knowledge led me to an extensive New England ancestry from Old Norfolk County in colonial Massachusetts Bay Colony (eastern New Hampshire towns and Massachusetts towns north of the Merrimack River).

As far as I can tell, all the information in this record is correct (well, the registrar's address is probably incorrect). The birth date, birth place, parents names, parents birthplaces, etc. are secondary information and should be confirmed by other records. But they do match the information in the Smith Family Bible, other family papers, and census records.

I just realized that I have not found Abbie's final resting place - I wonder where she is inurned? My best guess is at Cypress View Mausoleum where my great-grandparents and grandparents are inurned. This is the first I've heard of "Clover Lawn Crematory" and have no clue where that was in 1931, although it was probably near Benbough's Funeral Parlor in downtown San Diego. I can probably find out from a 1931 San Diego City Directory.