(Not So) Wordless Wednesday - Post 99: The Russ Mill in San Diego

I'm posting family photographs from my collection on Wednesdays, but they won't be wordless Wednesday posts like others do - I simply am incapable of having a wordless post.

I managed to scan about 100 family photographs in the Scanfest in January, and have converted the scanned TIF files to smaller JPGs, cropped and rotated as best I can. Many of these were "new" to my digital photograph collection.

Here is a photograph from the Carringer family collection handed down by my mother in the 1988 to 2002 time period: 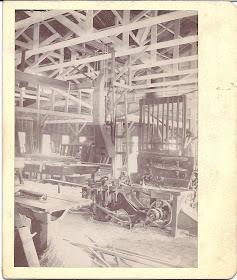 This is a photograph of the inside of the Russ Lumber & Mill Company in San Diego, from the 1900 to 1910 time period. My great-grandfather, Henry Austin Carringer, worked at the Russ Lumber and Mill for several years - at least from 1897 to 1903, according to the San Diego City Directories. The Russ Lumber and Mill was located at First and I Streets in downtown San Diego.
I wonder if this was the machine that Austin used, or if this is a stock photograph made by the company? I have not researched the Russ Lumber and Mill Company in any depth. I wonder if there are files on the company at the San Diego Historical Society?
A side note: Last week's photograph of my grandfather and his friends at La Jolla beach was seen by the editor of the La Jolla Light newspaper, and will be published in the newspaper soon. The editor passed the photograph to local historians who identified the site that the photograph was taken. I updated my post to reflect that site.
Randy Seaver at 8:42 AM
Share