It's Treasure Chest Thursday - time to find another jewel hiding in my genealogical treasure files on my computer.

One of the records I need to prove my ancestral line back to the 1620 Mayflower passengers (if I ever want to join the Mayflower Society) is the birth of Julia White in 1848 to Henry and Amy (Oatley) White. I have found no birth record for her, and the marriage record for "Juliette" White to Thomas Richmond in 1868 does not list her parents. I wrote to the Killingly, Connecticut Town Hall for a death record, and received this: 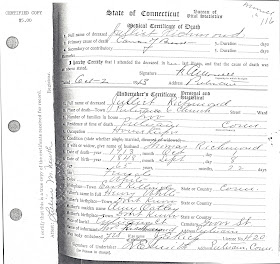 Her death record, as "Julliet Richmond," does list her parents as Henry White and Amy Oatley. It lists her cause of death as cancer of the breast, and her residence, at the time of her death, as 6 Church Street in Putnam, Connecticut (I don't think I knew that before). It lists her birthplace as East Killingly, Connecticut. The informant - her husband, Thomas Richmond - didn't know the birthplace of her father and mother.
Julia (White) Richmond was buried in Grove Street Cemetery in Putnam, Windham County, Connecticut. She is buried with her husband, Thomas Richmond and first son, Frederic (1870-1875) - the gravestone is shown here. More information about this couple is provided in my post Thomas Richmond (1848-1917) and Julia White (1848-1913).
The birth date and parents names in this "original source" death record are definitely "secondary information" and "direct evidence" - but it is the "best" and "most authoritative" record I have for those facts. This record agrees with the other records I have about Julia White's birth, from censsu records and her obituary.
Randy Seaver at 8:06 AM
Share