....
It's Treasure Chest Thursday - time to find another jewel hiding in my genealogical treasure files on my computer.

One of the records I need to prove my ancestral line back to the 1620 Mayflower passengers (if I ever want to join the Mayflower Society) is the marriage of Thomas Richmond to Julia White in 1868. I sent away to the Killingly, Connecticut Town Hall and received this: 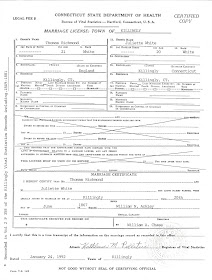 The record indicates that Thomas Richmond (age 21, white, born in England, resided in Killingly) was married to Juliette White (age 20, white, born in Killingly, Connecticut, resided in Killingly, CT) on 20 June 1867 in Killingly, by William N. Ackley.
That's wonderful, but all other records I have indicate that the marriage date was 1868 not 1867. However, this is an "official" record and it says 1867, whereas the family records are not "official." When I visited Killingly Town Hall in 1994, I searched through the record book for this marriage and it was on the page that had 1867 at the top of the page, but 1868 further down and before this particular entry, so I am pretty sure that 1868 is the correct year.
My problem is this: Which year should I use for any descendancy application? Obviously, I could write again to Killingly and see if I get a record with the correct year.
Another potential problem: Juliette White's given name was Julia, not Juliette, so that is a "difference" that has to be noted and justified on any descendancy application. She went by Juliet all of her life.
One of the frustrations with this record, like other records, is that not all possible information is filled in. I would have loved to have the birthplaces, date of birth and parents names on this record, but they were not included. Those items would have made the link from her parents to Julia White. I don't have a birth record for Julia/Juliet. I do have a death record for "Julliet Richmond" that lists her birth date, birthplace and parents names.
Randy Seaver at 8:57 AM
Share