Images of the Will of Thomas Page (died Hawstead, Suffolk, 1637)

...
I took advantage of my one day at the Family History Library in Salt Lake City last week to find the will of Thomas Page, yeoman of Hawstead in Suffolk, the father of my ancestress Susanna (Page) Gleason. The rampant online family tree errors and the fortuitous Googling that led me to this relationship was discussed in my post Who were parents of Susanna Page (ca1611-1691)?

While at the FHL, I ventured to the British/Canadian Floor and talked to one of the consultants about my specific problem. I had a name, a parish and a year, but was unsure which resource to use. The consultant was excellent, and after consulting a notebook on the shelf concerning Suffolk resources, advised me to check British film 97,086 for "Original wills, 1634-1635, indexes." I did that, and did not find an index entry for Thomas Page. So I looked at the next film , 97,087, for "Registered wills, v. 53 Gael 1636-1638."

After much scrolling, I found the will of Thomas Page of Hawstead on pages 146 and 147 (there are two leafs for each page). Here is the image I captured from the microfilm to my USB drive for the right part of Page 146: 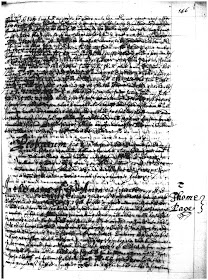 As you can see, there is quite a bit of bleed-through from the other side of the paper, but you can see the start of Thomas Page's will at the bottom of the page.

I brought the images of the three pages into my Photo editing program, and adjusted brightness and contrast and obtained images with somewhat improved readability. Here is page 146: 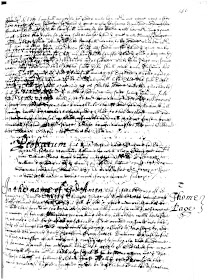 And page 147 (left leaf) with the mention of "my daughter Susan Page ... wife of Thomas Gleeson" in the 18th line into the 19th line (Gleeson is the first word of the 19th line down): 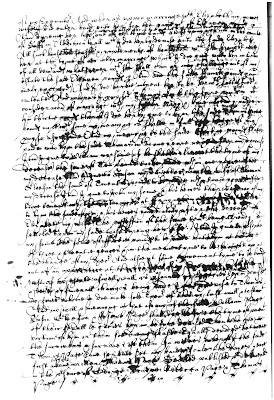 And the third image from the will, with the will of Marian Frost taking the balance of the page: 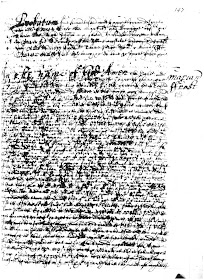 I was pretty lucky to find this will to be fairly clear - there were many wills on this microfilm that had significant bleed-through and thick pen strokes to the extent that they were unreadable. These pages are clear enough to read most of it, and if I could figure out the Elizabethan paleography, I would transcribe it. I can make out some of it, but some of it is really difficult.
The lessons learned in this effort include:
* You can find old wills and other records in English parishes and counties - mostly on the FHL Microfilms.

* It was really unclear which set of probate records would have this record - there were two different sets of original wills on microfilm.

Apparently, the volume that was used by the index book was Volume 57, while the FHL volume was Volume 53. It was on page 146!

* The Page family researchers did a marvelous job of finding and abstracting information from these wills!

* Online family trees can really suck, especially for "unconnected females" in colonial New England.
UPDATED 8 p.m.: Martin asked in Comments "Question: Did the web page on which you found the information give the proper citation for this will or just a transcription? How much work on your own did you have to do to verify this information?"
The web page that I found this on - here - noted only that "...They have been sifting records for Co. Suffolk, England..." and "THOMAS PAGE of Hawstead, yeoman, 13 January 1636/37" for a reference. The page had a wordy abstract of the will rather than a transcription.
In order to find the actual will, I consulted the LDS Family History Library Catalog before I went to Salt Lake City, looked for "Suffolk, England" and "Probate Record Indexes" and printed off the pages for two references - this book and this list of registered wills in the Archdeaconry of Sudbury. Before I got to SLC, I had identified film 97,087 (1636-1638) as the most likely candidate, but didn't have a page number for the will.
At the FHL, I checked the book first, noted the volume/page for Thomas Page of Hawstead 1637, and then the volume number in the book didn't match the volume number in the microfilms. So I asked the FHL consultant, who looked in a notebook, and said to check the 1634-1635 index, so I did. Nothing there helped me. So I went through the 1636-1638 volume page-by-page until I found the right will on page 146. It helps that they wrote the testator's name in large print in the margin! That's when I figured out that the book's volume 57 equalled the FHL Volume 53 (you would think that the FHL would have kept the same numbering system, but no...). This exercise took about 60 minutes total at the FHL, including getting the images from the film to my USB drive.
As you can see, I had to find the right microfilm using finding aids and scroll through it to find the prize. The message board post definitely helped, though!
Then to verify the information, I pored over the secretary hand of the will long into the night and after many head scratches (and pulls on my favorite beverage) I decided that the will abstract matched the actual will pretty well!
Randy Seaver at 10:27 AM
Share