...
It's Treasure Chest Thursday - time to find one of those "family history jewels" that illuminates the lives and times of our ancestors.

Today is a newspaper article from the San Diego Union newspaper dated 11 September 1937. The subject is the 50th Wedding anniversary of my great-grandparents, Henry Austin and Della (Smith) Carringer.

Page 2 has the headline:

and the picture at the top of the page is headlined: 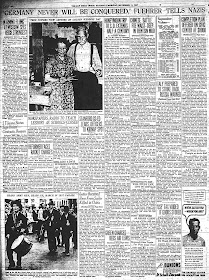 Below the picture, the caption says:

"Mr. and Mrs. Henry A. Carringer, who came to San Diego on their honeymoon 49 years and 11 months ago, are looking over letters at their mailbox. Today is their Golden Wedding anniversary."

There is a long column article to the right of the picture, which reads:

HONEYMOON TRIP TO S.D. EXTENDS HALF A CENTURY
by Forrest Warren

Mr. and Mrs. Henry A. Carringer, 2115 Thirtieth st., are fine examples of True Vowers, who have worked together side by side for 50 years. Today they celebrate their Golden Wedding anniversary.

The romance of Mr. and Mrs. Carringer began, when they met in Boulder, Colo. She was Della Smith then and her home was in Concordia, Kan.

After three years of courtship, during which time they each proved up on claims in Cheyenne county, Kan., hey sold their holdings, were united in marriage, and came to San Diego one month later.

Mr. and Mrs. Carringer came to San Diego on their honeymoon and are just one month short of having been here 50 years. Mr. Carringer recalled yesterday that he had $20 in his pocket when they landed here.
39 years at One Address
"We have lived here on this corner 39 years," said Mrs. Carringer. "We built this house. On our lot we have planted and grown most every kind of fruit and vegetable that grows in California. Flowers have always been my hobby."

After his working hours as a cabinet maker, Mr. Carringer did all the finishing on their home and also built some of their beautiful furniture.

"My wife designed some of the furniture and many a time I worked while she held a lamp for me to see," said Mr. Carringer.

The tables and chairs in their home are made from several varieties of rare woods and are quite attractive in their design.

Mrs. Carringer's artistic ability is evidenced by her paintings. When asked if she had done any painting in the last few years she replied, "No, I have been too busy to paint." The Carringers have several apartments they rent and they spend most of their time looking after their property.
Still Busy at 84
Mr. Carringer, although near 85, showed a visitor his activity around the home by keeping busy with a wheelbarrow that was loaded with trimmings he had cut from trees.

Life as a skilled mechanic started at 64 for Mr. Carringer, when he took a job as airplane repair man at Rockwell field.

He saw the airplane develop from its primitive state to its present high efficiency. When he began work in the repair of airplanes, the wood propeller was used. On the piano in the Carringer home is a propeller, highly polished, that he made. It was used for experimental purposes. This propeller is more than eight feet long.

For ten years Mr. Carringer was foreman in the wood and fabric section of the plane repair shop at Rockwell field. After 15 years of service, and on his 79th birthday, Mr. Carringer was retired with high honors. The superintendent, E.G. Lupton, together with 114 employees, signed a letter of appreciation and presented him with a big, easy chair.
Have Neighborly Philosophy
"It's a nice chair, but up to now I've been too busy to use it much," said the veteran mechanic.

Their son, Lyle Carringer, "grew up" in the Marston store, being employed there when he was 14. He is in the business offices of the store. The son, with his wife and daughter, Betty, live at 2130 Fern st., which adjoins the Carringer home. Miss Betty is in her second year at State college.

When asked about their philosophy of life, Mrs. Carringer said: "We have worked hard as partners and tried always to be kind and helpful to others. After all, we are of the opinion that this is the best religion to make a happy and successful life.
Rode in Surrey to Street Car
When the Carringers began building their present home, the nearest street car was at Sixteenth and Broadway. They had an old horsedrawn surrey they used in transporting themselves and neighbors to the Broadway car. "Our old surrey would be crammed full of men, women and children," said Mrs. Carringer.

The collection of photographs, showing scenes around their home are interesting. Some of their old time neighbors who have lived in the Brooklyn Heights district will felicitate Mr. and Mrs. Carringer today.

The Carringers will hold a family dinner and will proudly wear their blue and gold True Vow Keeper buttons presented to them yesterday.

-----------------------------
There are many items of family and historical interest in this article, and this is the only record I have about them. For instance, I did not know where they met, or when; I did not know that they had land in Cheyenne county, Kansas; I did not know how long Austin worked at Rockwell Field (which is now North Island Naval Air Station in Coronado), or when he retired; I didn't know about the horsedrawn surrey - that's a great story.

I sure wish that the family still had the eight-foot long propeller and some of the handmade furniture. My brother has the melodion (not mentioned above) and several of the Victorian style chairs. I would love to visit the family home again and see the inside of the rooms again (the last time I was there was probably about 1980 and I didn't pay attention to the details).

Fortunately, the index to the San Diego Union newspaper covers these years, and I was able to easily find this article on microfilm at the San Diego Public Library.
Randy Seaver at 9:02 AM
Share