I'm posting family photographs from my collection on Wednesdays, but they won't be Wordless Wednesday posts like others do - I simply am incapable of having a wordless post.

I managed to scan about 100 family photographs in the Scanfest in January, and have converted the scanned TIF files to smaller JPGs, cropped and rotated as best I can. Many of these were "new" to my digital photograph collection.

Here is a photograph from the Carringer family collection handed down by my mother in the 1988 to 2002 time period: 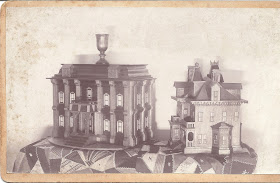 The information on the back of this card stock indicates that this is a model of a mansion created from matchboxes by Edgar Carringer in about 1896.
Harvey Edgar Carringer (1852-1946) was the brother of Henry Austin Carringer, my great-grandfather. Harvey Edgar and Henry Austin Carringer were sons of David Jackson and Rebecca (Spangler) Carringer. Uncle Edgar never married.or had known children. He lived separately from Austin and Della (Smith) Carringer, but often worked for them doing handyman jobs to earn money to pay his rent or bills.
I don't know if this is a model of an actual mansion, or if it is just something built by Edgar to pass his time and hone his skills. In 1896, when it was purportedly made, Edgar Carringer was probably still living in Boulder, Colorado with his parents.
I don't recall ever seeing this "work of art," and I don't know if it still exists. My guess is that it has been lost to the ravages of time or the trash bin.
Randy Seaver at 8:37 AM
Share