Last week, we learned that Rachel (Morley) Whittle probably married again to Thomas Spencer, according to several California newspaper articles.
What about Alexander Whittle?  Did he die before she married Thomas Spencer?  Did he never show up again in any record and Rachel remarried without knowing if she was a widow?  Did Rachel take up with Mr. Spencer while she was married to Alexander Whittle?
While searching for the fate of Alexander Whittle in the different historical newspaper databases, I found this article in the 19th Century U.S. Newspapers external database through the NEHGS' http://www.americanancestors.org/ website.  Here is the top of the web page I found: 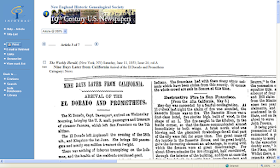 The article is from The Weekly Herald of New York City, dated Saturday, June 11, 1853, Issue 24, Column A titled "Nine Days Later from California, "Arrival of the El Dorado and Prometheus."  The tidbit about Alexander Whittle is at the bottom of the middle column below: 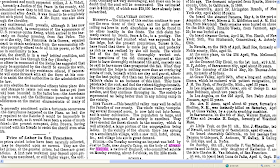 The tidbit reads (under the heading of "Calaveras County"::

"SUICIDE -- On Tuesday morning an inquest was held by Justice Tuffs, near Angel's Camp, on the body of Alexander Whittle, a native of England, who committed suicide Monday evening, about 8'o'clock, on Six Mile creek."

The newspaper published on Saturday, 11 June, and it took nine days to get to New York, so the actual date of death, Monday two weeks before, may have been 30 May 1853.  Or perhaps an earlier Monday, 23 May or even 16 May depending on the publication schedule of the original newspaper.

I lamented in an earlier post that I did not have access to GenealogyBank, and my readers came through for me again.  Reader Magnus Persson of Lund, Sweden checked GenealogyBank for me, and commented:

I have been reading your blog with great interest for the past year, keep up the good work!  I have a subscription to Genealogybank and thought that I should see if I could lend a hand.  When searching in Genealogybank I found an article about the death of an Alexander Whittle in 1853.

It was published in the Daily Placer Times and Transcript on 10th May 1853 and reads:

"A man by the name of Alexander Whittle, aged about thirty five, committed suicide in Calaveras last week. Cause, an absconding wife and liquor."

Simultaneously, Lorine McGinnis Schulze saw my post on Facebook, and found the same information and passed it on to me.

THANK YOU to Magnus and Lorine!!!  I continue to get ahead with lots of help from my genea-readers and friends.

So what is the death date?  The publication in the Daily Placer Times and Transcript was on Tuesday, 10 May, so "last week" on Monday should be Monday, 2 May 1853.

Oh no, Alexander committed suicide!  Caused by an "absconding wife" and "liquor."  Apparently, he did this near Angel's Camp in Calaveras County in the California Gold Country.

My first reaction was "poor Alexander" - but then I wondered if he had neglected Rachel back in San Francisco.  Did they ever make contact again?  It would seem so, if he blamed an "absconding wife."  We cannot know the interaction between Alexander and Rachel in California because of the dearth of records.  Was Alexander consumed by "gold fever?"  Did Rachel take up with other men in San Francisco?  It would make a great "write your own ending soap opera," wouldn't it?
Magnus and Lorine also found another article on GenealogyBank.  Magnus comment on my earlier post said:

I also found the matrimony notice for Rachel Whittle and Thomas Spencer in Alta California on 1st March 1854. It reads:

“In Trinity Church, by the Rector, on the 19th instant, Thomas Spencer, to Mrs. Rachel Whittle, both of San Francisco.”

It looks like widow Rachel Whittle married Thomas Spencer in Trinity Church in San Francisco on 19 February 1854 (although I don't see why it says "instant" which usually means "the current month," unless it was written in February and to the writer that would be "instant" rather than "ultimo").

From the post What happened to Rachel (Morley) Whittle? we know that Rachel (Morley) (Whittle) Spencer was in Sacramento, California in the 1858 to 1860 time frame, but she doesn't appear on the 1860 U.S. Census (at least I can't find her as an Rac*, an R, a Whit*, a Spen*, a Tras* or a non-name born in 1822 +/- 5 years in England in Sacramento, Calaveras, Tuolumne or San Francisco counties.