I wanted to see if there was a funeral home record for Thomas Spencer, the second husband of Rachel (Morley) (Whittle) Spencer.  On the Record Search site, I selected the specific database and entered Thomas Spencer in the search fields, received one match for "Thos Spencer" and saw this record: 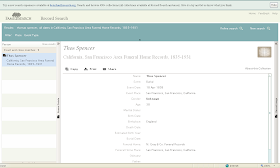 There is a death date of 18 April 1858 in San Francisco in this record, and there is an image icon over on the right margin, so I clicked that and saw: 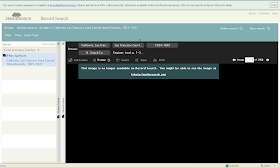 The image isn't on the Record Search site any longer - the screen above says that "You might be able to  see the image at http:///fsbeta.familysearch.org."  Okay - I understand, the records are in the process of being moved.

Over to the FamilySearch Beta site, and selecting the Funeral Home Record collection from the list, I entered the name "Thomas" "Spencer" in the search fields (but left the "exact match" boxes unchecked.  There were four matches: 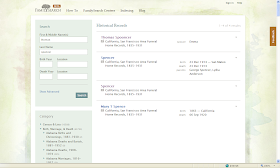 None of the four matches were for "Thos Spencer" who died in 1858.  Why is that?  I searched for "Thos Spencer" with the exact match boxes checked and received no matches.  I thought that maybe the first match was the one, so I clicked on that and saw: 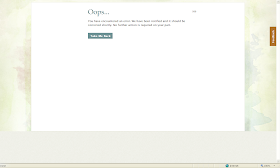 It says "Oops...You have encountered an error. We have been notified and it should be corrected shortly. No further action is required on your part."

My best guess is that the last addition of records to this specific collection was loaded onto Record Search on 15 September, but this particular record, or the index for it, has not been copied over to FamilySearch Beta yet.  That may be  why the search on the Beta site failed at this time.  It doesn't explain why there are no images on the Beta site for the records that are already there.

The description of the database says "Images for all years in collection can be browsed, but name index currently covers only years 1896-1931."  Oh.  Perhaps the index on Record Search has been expanded to include the 1858 record, but the index is not on FamilySearch Beta yet.
I need to be more patient with online databases - they are often imperfect.  There is so much available now that my expectation is that everything will work perfectly - the imaging, the indexing, the record summary, the search and the image display.  FamilySearch Beta is a "beta site" - meaning that it should work well but it may have glitches occasionally.

Back on the FamilySearch Beta collection page I noted that the user could browse the images available.  Here is the screen - I chose the San Francisco records: 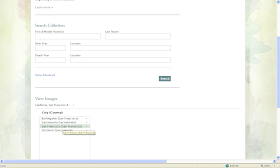 Then it told me that I had to sign in to see these images.  I recently obtained a FamilySearch account as a member of the general public, so I signed in and was able to get to the images for this collection.  Because, they were not indexed on this site, I had to browse the images.  What page was it on?  The Record Search record summary indicates image #208.  I put that image number in the box, and it was records for 1860.

The records seem to be in date order, so I quickly was able to find the right image on Image #118: 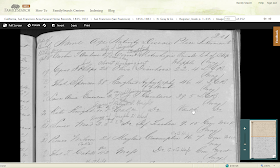 I'm not sure what LGR is, perhaps a cemetery name, or a section of a specific cemetery.  "Gray" is the name of the funeral home.

Is this the spouse of Rachel (Morley) (Whittle) Spencer?  I think that it probably is, but have no other information yet.  There may be an obituary or death notice in the San Francisco newspapers that has more information.
Randy Seaver at 11:05 AM
Share