It's Tombstone Tuesday and I actually visited a cemetery last Friday and took pictures.  Alert readers know that I have exhausted my collection of ancestral tombstones, and am occasionally posting photos of interesting stones.

My wife and I spent the weekend in Julian, a small mountain town in San Diego County famous for its apples, gold mines and drug store, founded in 1869.  It is a town with many second homes of Southern California people in the surrounding hills, but is susceptible to fires and earthquakes.

I responded to a query about two years ago from a fellow in Ontario (Canada) requesting information about his Potter ancestry.  I found that his grandparents and great-grandparents were early residents of Julian (before 1875), and had a retail store there.  In my research, I uncovered census records, city directory records and an obituary that defined many of his family relationships.  I gave him the mailing addresses for the historical society and Pioneer Museum so he could inquire about more information.  I promised him that the next time I visited Julian that I would walk the cemetery and see if I could find the Potter stones there.

Last Friday, I spent an hour at Pioneer Cemetery in Julian, climbing Boot Hill from Farmer Road (up about 100 steps, whew, remind me not to go mountain climbing!) and wandering around the cemetery.  There is a circular road that encompasses Pioneer Circle and the Potter/Bush family plot is within that circle.

Here is the entrance on Farmer Road;  Pioneer Circle is at the top of the steps: 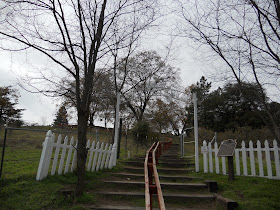 The Potter/Bush stones are shown below: 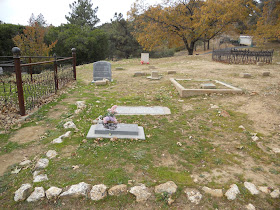 The area is lined with small stones,and the locked fenced area to the left has a stone at the entrance that says "Potter."  Some of the Potter stones have a small copper plate with just the name of the deceased person, which were probably placed by the family long after the persons died.  Others, including the Potter grandparents and great-grandparents, have standing gravestones with names and dates on them.

The Julian Library had a recently published book by David Lewis, titled Last Known Address, The History of the Julian Cemetery (published by Headstone Publishing, Julian CA, 2008).  The book had historical information about the cemetery and biographical sketches about some of the pioneer families, including the Potters.  One of the trustees of the cemetery is a Potter descended from the pioneers.  My correspondent will be happy to hear about this!  I will forward close up pictures of the stones and the area to my correspondent in Ontario.

The names of persons buried in Pioneer Cemetery in Julian are listed at http://www.juliancemetery.org/content/Name%20List.pdf.

I was a good Graveyard Rabbit last weekend!
Randy Seaver at 8:59 AM
Share