It's Treasure Chest Thursday, time to share one of the documents or artifacts in my family history collection.  In previous posts, I have displayed documents from the Civil War Pension File of Isaac Seaver, my second great-grandfather.

I received the complete Civil War Pension File for Isaac Seaver on 3 January - see my post My Christmas Present Came Today - Oh Boy! - and it has 81 pages in the file.  Some of them have little or no information on them.  I'm going to cherry-pick some pages for this and later Treasure Chest Thursday posts.

The "treasure" this week is the "General Affidavit" that supports the application of the widow, Alvina M. (Bradley) (Lewis) Seaver. 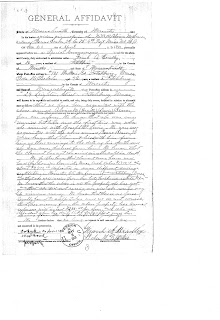 The transcription of this document is (underlined is text filled in on lines in the form; italics is handwritten text):

State of Massachusetts, County of Worcester, SS;
In the matter of widows original pension claim No 738,086 Alvina M. Seaver,
widow of Isaac Seaver, 3d, Co "H" 4th Reg't Mass Vol. H.A.
on this 20 day of April, A.D. 1901, personally
appeared before me a Special Commissioner in and for the afore-
said County, duly authorized to administer oaths Frank A. Bradley,
aged 36 years, a resident of Fitchburg, in the County
of Worcester, and State of Massachusetts
whose Post-office address is #101 Walton St. Fitchburg Mass.
Ida M. Belcher aged 42 years, a resident of Fitchburg,
in the County of Worcester,
and State of Massachusetts, whose Post-office address is
#24 Leighton Street - Fitchburg, Mass.
well known to be reputable and entitled to credit, and who, being duly sworn, declared in relation to aforesaid
case as follows: that we have been acquainted with the
above named Alvina M. (Bradley) (Lewis) Seaver
from our infancy.  We know that she was never
married but twice and the first time was when
she married with Joseph P. Lewis.  We were well
acquainted with the above named Isaac Seaver 3d
and we know that claimant lived with him from
time of their marriage to the date of his death and
she was never divorced from hi.  We know that
the claimant has not remarried since the soldier's death.
We further know that claimant owns house and
land (her house) in Leominster, Mass., cash value $1,700.00 also
about $4,500.00 deposited in seven different savings
institutions in Worcester, Clinton, Leominster and Fitchburg, Mass,
also that she will receive from her late husband's estate $1,200.00
We know that the above is all the property she has got
and that she did not receive, nor will she receive any
life insurance money.  We know that there is no person
legally bound to support her and we do not consider
that her income from the above property less annual
expenses will exceed $250.00 per year, and she is
dependent upon her daily labor for support and her
income from the above described property.
We further declare that we have no interest in said case and are
not concerned in its prosecution.

Round stamp of the Pension Office is dated 3 May 1901.

This affidavit was written just six weeks after the death of Isaac Seaver on 12 March 1901.  Alvina had built up quite a savings from her two marriages - family stories were that she was frugal.  Isaac Seaver's will did not mention any of the details of his real estate (which was sold to pay the legacies), so this document (and others in the packet) adds to my knowledge base about his real estate holdings.

The affidavit indicates that Frank A. Bradley and Ida M. Belcher have known Alvina "since infancy" - my guess is that they are Alvina's siblings.  This is sort of a no brainer - Bradley was Alvina's married name.  In the 1870 US Census, the Harvey Bradley family in Dickinson, Franklin County, New York lists Alvina Bradley age 21, Ida Bradley age 11 and Frank Bradley age 7.