...
It's Treasure Chest Thursday, time to share one of the documents or artifacts in my family history collection.  In many previous posts, I have displayed documents from the Civil War Pension File of Isaac Seaver, my second great-grandfather.

This week I'm posting the "death certificate" from Leominster, Massachusetts submitted by the widow to the Pension Bureau, which is on page 65 of the Pension File received from NARA (plus the reverse of this paper, which is page 66 in the file): 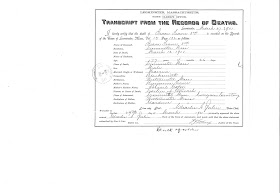 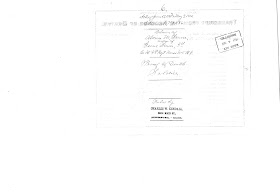 The transcription of the "Transcript from the Records of Deaths" from the Leominster  Town Clerk's Office is (blanks filled in are italicized and underlined):

TRANSCRIPT FROM THE RECORDS OF DEATHS.
Leominster, March 27, 1901

I hereby certify that the death of Isaac Seaver 3rd is recorded on the Records
of the Town of Leominster, Mass., Vol. 15 Page 132 as follows:

A true copy  Attest:  Charles A. Joslin Town Clerk
On this 29th day of March, 1901, personally appeared the above
named Charles A. Joslin, clerk of the Town of Leominster, and made oath that the above statement
subscribed by him is true.
Before me, T. Lothrop, Justice of the Peace.

The transcription of the reverse side of the above record is:

It appears, from the reverse side of the certificate, that Alvina's attorney, Charles Kendall, sent this death record into the Pension Bureau to be added to the file.  It was probably one of the tasks he, as the attorney for the claim, was tasked to do to earn his fee.

All of the information above seems correct, except for:  The age at death of 77 years, 4 months, 26 days on 12 March 1901 translates to a birth date of 14 October 1823, whereas Isaac's "official" birth date from Westminster, Mass. records is 16 October 1823.  The difference is probably caused by an error by the clerk, or told to the clerk by the informant (probably the widow, Alvina Seaver), or by someone making a calculation that assumed February (the month before the March death date) had 30 days.  It's a small point, but sometimes this type of information is all that a researcher has to calculate a birth date.

As a result of checking for Isaac's birth date, I found that I do not have an image of an Isaac Seaver birth record (neither a "certificate" or a town clerk's record) in my computer files.  I do have an image of Isaac's death record in the Massachusetts Vital Records, 1841-1910 from the AmericanAncestors site, but it is an old one and very blurry when magnified to a readable size.  More items to add to my to-do list!
Randy Seaver at 9:30 AM
Share