In this post, I'm going to demonstrate how to use RootsMagic 4 to add a family to newFamilySearch Family Tree.

My second great-grandfather, Isaac Seaver (1823-1901), is not in the newFamilySearch Family Tree as a well-defined person.  He is listed several times without parents, or without a birth or death date, or with spouses (without a surname). 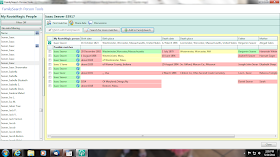 The first one was really the Isaac Seaver (1802-1870) that I've been working with in earlier posts in this series, so I did not choose to Match with him.  All of the other possible matches have no exact match (green) to my data, but does have approximate matches (yellow).  Rather than select one of them, I elected to click on the "Add to FamilySearch" as a new person.  After the click, a popup box appeared: 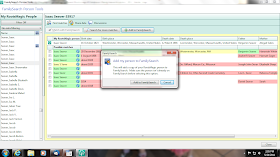 The popup box said "This will add a copy of your RootsMagic person to FamilySearch. Make sure the person isn't already on FamilySearch before selecting this option."  I clicked on the "Add to FamilySearch" button.   The system gave Isaac Seaver a PIN and showed more possible matches with only names of possible spouses. 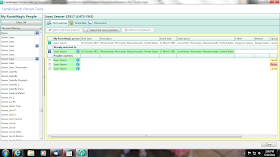 I declined to Match any of them, and clicked on the "Share Data" button just below Isaac's name and ID at the top of the screen, to see the "FamilySearch Person Tools" screen: 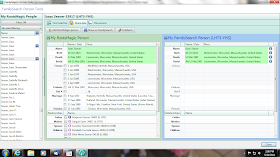 In the screen above, the "My RootsMagic Person is on the left, and the "My FamilySearch Person" is on the right.  The items that were transferred into newFamilySearch are highlighted in green on both sides - the birth, death and burial information.  The rest of my RootsMagic information is not highlighted with a background color - the census, pension and probate facts, the three marriages, the three spouses and the five children.  Each of these should be added, one at a time, to the newFamilySearch online tree.

The system would not let me add the Marriage Facts until I had added the Spouse names.  I wanted to add the parents - I clicked on the box to the left of the Father's name (Benjamin Seaver) and saw: 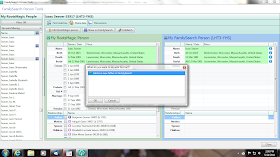 The popup box asked if I wanted to "Add as a new Father in FamilySearch?" I clicked "OK." The system found possible matches for this Benjamin Seaver and I selected the ones that were correct and clicked on the "Match this person" button. The "FamilySearch Person Tools" screen in RootsMagic updated and showed the addition.

I did this operation for Isaac's mother, Abigail Gates, and started in on his spouses and children. When I got to his first wife, Juliet Glazier, there were possible matches in the list, and I selected three that were this Juliet, and when I clicked on the "Match with FamilySearch" a popup box asked "Combine and Match? Do you want to combine the checked people on FamilySearch and match your RootsMagic person to the combined person?" as shown below: 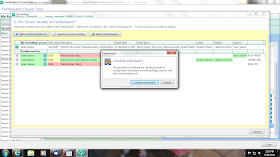 I completed adding all of the spouses and children, but still didn't have the Marriage facts entered, as shown below: 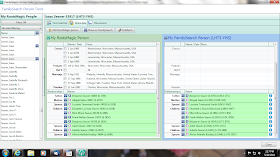 I then added the Marriage facts, and in the process I had to identify which spouse matched up with the correct date and location as shown below: 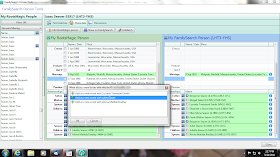 I carefully selected the correct spouse, and finished the task of entering all three spouses into newFamilySearch, as shown below: 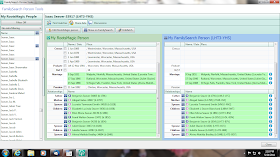 I'm finished entering data for this family, but now I need to go to the parents, the spouses, and the children and do this same process for their facts, their parents, their spouses and their children.

The actual selecting, matching and adding process took about ten minutes in real time for this particular family.  In the process, I entered data for 18 persons!

One significant thing I would like to see in RootsMagic is a way to navigate to one of the parents, a spouse or a child in my RootsMagic database.  At present, I have to go to the index and search for the RootsMagic entry for the other person.

I can see how a user can easily get distracted, or sidetracked, and forget where they were and what they were doing, and leave some families incomplete.  This process is fairly complex, in my opinion, because of all the Fact details to be added or matched, and all of the possible matches, often with erroneous data, in the newFamilySearch tree.

In the next post, I'll go back into the newFamilySearch Family Tree online and see if my Isaac Seaver data was added, and then try to select the best information for Isaac's Summary page.
Randy Seaver at 2:28 PM
Share