In this post, I'm going to demonstrate how to combine records in the newFamilySearch Family Tree.

After logging in to newFamilySearch, clicking on the "Me and My Ancestors" tab, and then clicking on the pedigree chart to get back to Isaac Seaver (1823-1901), I clicked on Isaac's link on the Pedigree Chart and saw the "Summary" page for Isaac: 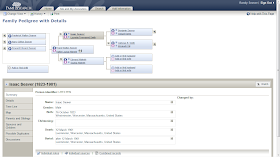 The information that I entered for Isaac yesterday from RootsMagic 4 is in the newFamilySearch system (it was there immediately after I entered it yesterday).  He has Person Identifier Number LHT7-5YJ.

I was curious to see how the information for his spouses and children looked, so I clicked on the link for the "Spouses and Children" page and saw: 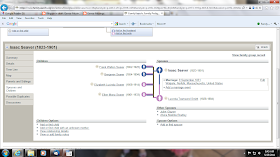 That all looks pretty good.  What about the "Parents and Siblings" page? 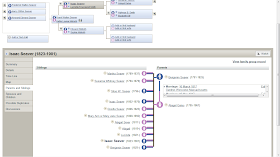 I'm at a loss now as to how to "fix" this specific problem, which I'm thinking is probably fairly common in the newFamilySearch system.  Should I try to fix it by adding the correct information, and then combining records so that it turns out right?  I may try to do that later.

I now have my Isaac Seaver's information in the system, but I know that there are other records for him, and as a responsible newFamilySearch user (hey, I'm trying to be!), I need to combine as many records for him as I can.

I clicked on the "Possible Duplicates" button and saw: 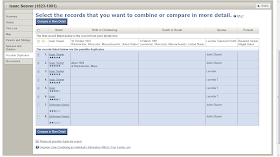 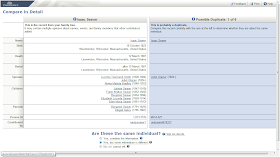 The screen above shows the comparison of my information (on the left of the screen) with the first possible duplicate (on the right).  There are three choices at the bottom of the page under "Are these the same individual?":  "Yes, combine the information;" "Yes, but some information is different;" and
"No, or I cannot tell."  I chose the second option, and clicked the "Next" button.

I did this for the first six possible duplicates and after clicking on "Done" I saw this page: 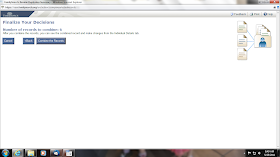 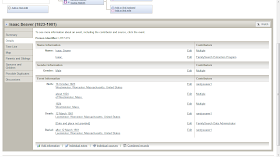 While all of the "other information" that I combined is shown on the "Details" page, at least the records in newFamilySearch for Isaac Seaver (1823-1901) is correct and complete (I think!).  Until one of the other submitters of this "other information" changes it.

During this exercise, I took the opportunity to select the "best information" for Isaac's children, his wives, and Lucretia Smith's parents.  I now need to enter the families for the next generation back from Isaac and Lucretia (Smith) Seaver to see if I can "fix" the wrong information in the newFamilySearch tree.

It took less than ten minutes for me to "fix" the Isaac Seaver (1823-1901) family information (except for the Parents and Siblings problem).  It was fairly straightforward and logical.  I don't see how it could be done easily any other way (as long as someone having the capability to throw out the wrong information!).  But I'm leery of doing this for EVERY family in my ancestry, or worse yet, every family in my genealogy database.

I had a comment on Facebook to one of these posts that said "it's very complicated."  Yes, it is.  But every online family tree system is complicated, and every family tree software program is complicated.  It just takes time to learn and use, and users need to remember that the "Help" button is their friend.  I'm writing these posts so that I can help my readers navigate, enter data, and edit data in the newFamilySearch

I'm not sure what I'll write about next in this series - I have some comments and emails on these posts, so maybe I'll highlight them so that my readers can benefit from their collected wisdom..
Randy Seaver at 10:36 AM
Share