The subject today is Mary Oatley's declaration for a Revolutionary War Pension based on Joseph Oatley's, her husband, service.

The application is on four pages (downloaded from www.Footnote.com): 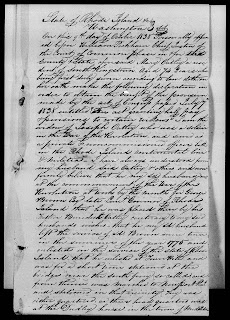 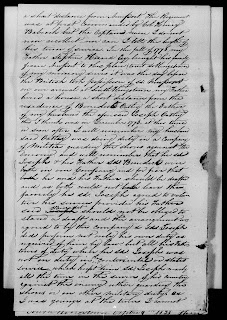 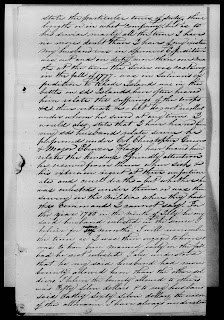 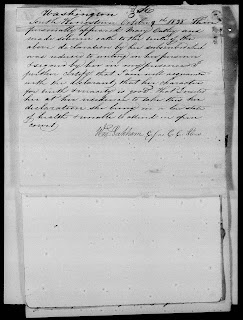 The transcription of this declaration is:

State of Rhode Island &c
Washington 3 SS
On this 9th day of October 1838 Personally appeared before William Peckham Chief Justice of the Court of Common Pleas in & for the county & State aforesaid Mary Oatley a resident of South Kingstown Aged 74 Years who being first duly sworn according to law doth on his oath make the following declaration in order to obtain the benefit of the provision made by the act of Congress passed July 7th 1838 entitled "An Act providing half pay & pensions to certain widows."  I am the widow of Joseph Oatley who was a soldier in the War of the Revolution and served as a private & noncommissioned officer both in the Rhode Island continental line & militia.  I have always understood from my husband said Oatley & others and now firmly believe that he my sd husband was at the commencement of the War of the Revolution at work by the month for George Brown Esq. late Lieut. Governor of Rhode Island that he was placed there by his Father Benedict Oatley contrary to my said husband's wishes.  That he my sd husband left the service of sd. Brown some time in the summer of the year 1775 and enlisted in the service of the State of Rhode Island that he enlisted at Town Hall and was for a short time stationed at the bridge near the south ferry (so-called), and from thence was marched to Newport R.I. and stationed in that vicinity.  They was either quartered or their head quarters was at the Dudley house in the town of Middletown

a short distance from Newport.  The Regiment was at first commanded by Vol. Henry Babcock but the Captain's name I do not now recollect nor can I tell the lengthy of his term of service.  In the fall of 1776 my Father Stephen Hazard Esq. brought his family from Newport to this place (to wit So Kingstown) of my memory serves it was the day before the British took possession of sd Newport on our arrival at South Kingstown at South Kingstown my Father hired a house a short distance from the residence of Benedict Oatley the Father of my husband aforesaid Joseph Oatley this I think was in December 1776.  At this time or soon after I will remember my husband said Oatley was doing duty in a Company of Militia guarding the shores against the enemy and well remember that he the sd Joseph & his Father sd Benedict were both in our company and for fear that both he and his Father should  be drafted and as both could not both leave the family he sd Joseph agreed to volunteer his services provided his Father said Benedict should not be obliged to stand a draft and the arrangement was agreed to by the company & said Joseph did perform not only his own duty as required of him, by law.  But all his Father's tours of duty when he sd Joseph was not on duty in the Continental or states service which kept him sd Joseph nearly all the time in the service of his country against the enemy either guarding the shores or any other military duty as I was younger at the time.  I cannot

[page 3]
state the particular tours of duty, their length or in what company, but as to his service nearly all the time I have no more doubt than I have of my existance my husband was in Sparrowes [???} Expedition was out and on duty more than one month at the time the Siren was cast away in the fall of 1777- was in Sulivan's expedition to Rhode Island was in the battles on sd Islands have often heard him relate the sufferings of the troop &c, their retreat &c, but do not recollect under whom he served at any time.  I would also state that I have heard him my sd husband relate service he performed under Col. Christopher Green [??] & Major Ebenezer Flagg, have heard him relate the kindness & friendly attention he received from them when sick & his extream regret at their unfortunate and cruel death - but whether he was enlisted under them or was then serving in the Militia where they had this command, I cannot say.  In the year 1780 in the month of July he my said husband enlisted in the service I believe for nine six months.  I will remember the time I was then engaged to him & was to have him married early in the fall had he not enlisted.  I also understood that he my said husband had more bounty allowed him than the others was Fifty silver dollars & to my husband said Oatley Sixty silver dollars, the reason of this allowance, I have always understood.

Washington 3 SS
South Kingstown October 9th 1838 Then personally appeared Mary Oatley and made solemn oath to the truth of the above declaration by her subscribed which was reduced to writing in her presence & signed by her in my presence. I further certify that I am well acquainted with the declarant, that her character for truth & veracity is good, that I visited her last he residence to take this declaration she being in a low state of health & unable to attend in open court.
.......................................W,. Peckham C. Jus. C.C. Pleas

Mary Oatley was aged 74 when she made this declaration to William Peckham.  She doesn't recall specific names and dates, but has some interesting comments about approximate times and persons, and she knows that her husband-to-be was away from her in the fall of 1780 because they were to be married then.  We saw in Amanuensis Monday - Marriage Deposition in Joseph Oatley's Revolutionary War Pension File that they married in January 1781.
Randy Seaver at 2:54 PM
Share