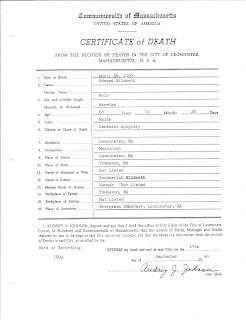 I obtained this death certificate in person at the Leominster Town Hall (on election day - they were really busy!).

Here is the transcription of the death certificate (typed parts in italics, form lines underlined):

The birth date of Edward calculates to 30 April 1831, which matches the other information I have.

The only "new" information on this certificate for me is the cause of death.
Randy Seaver at 9:04 AM
Share