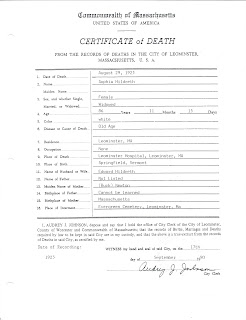 I obtained this death certificate in person at the Leominster Town Hall (on election day - they were really busy!).

Here is the transcription of the death certificate (typed parts in italics, form lines underlined):

I am not surprised that the informant did not know Sophia's father's name, or his birthplace.  Sophia's daughter (Hattie Louisa Hildreth) and son-in-law (Frank Walton Seaver) died before she did, and one of her grandsons, either Frederick Walton Seaver or Harry Clifton Seaver was probably the informant.

I just realized that I don't have an image of the death certificates of Hattie Louisa (Hildreth) Seaver and frank Walton Seaver.  Drat, did I miss them when I scanned all of my certificate collection?  Or do I not have them?
Randy Seaver at 9:19 AM
Share