Treasure Chest Thursday - A Certificate of Naturalization for T.S. Leland

This week, the "treasure" is the Certificate of Naturalization of Torger Sjurson (T.S.) Leland in the Dane County, Wisconsin, Circuit Court Records at the Wisconsin Historical Society Archives.  Finding the records was a two-step process - checking the card file index, and then finding the actual record in a bound book.

Here is a photograph of the Card File Index: 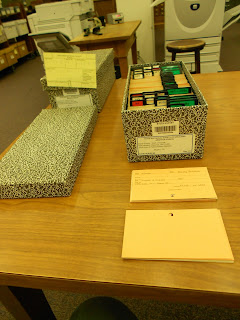 The photograph below is of one of the cards from the file (not T.S. Leland - I had to photocopy his at the direction of the curator, and haven't scanned it yet): 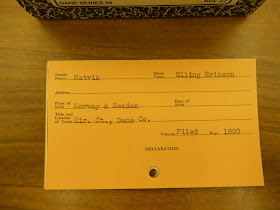 The actual Certificate of Naturalization is below, from Volume 10 of the Court records: 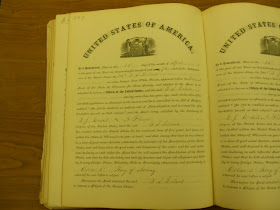 The transcription of this record is (handwritten text in italics and underlined):

Be it Remembered, That on this 13th day of the month of April
in the year of our Lord one thousand eight hundred and sixty 76, and of the Independ-
ence of the United States the 100th T S Leland
an alien, being a Free White Person, appeared before the Circuit
Court of the State of Wisconsin for Dane County, and applied to the Court to be
admitted to become a Citizen of the United States; and the said T.S. Leland
having, more than two years ago, made declaration of his
intended application as aforesaid, in the manner and form prescribed in an Act of Congress
entitled "An Act to establish an uniform rule of Naturalization, and to repeal the Acts
heretofore passed on that subject;" and the Court being satisfied by the testimony of
L.J. Erdall and A. Flom
citizens of the United States, that the said T.S. Leland
has resided within the United States for the continued term of five years last past, and
within the State of Wisconsin one year at least; and that during that time he has behaved
as a man of good moral character, attached to the principles of the Constitution of the United
States, and well disposed to the good order and happiness of the same;  and the said appli-
cant declaring on oath before the Court that he will support the Constitution of the United
States, and that he doth absolutely and entirely renounce and abjure all allegiance and fidel-
ity to every foreign Prince, Potentate, State or Sovereignty whatsoever, and particularly to
Oscar 2d  King of Norway
whereof he was before a subject.

"Thereupon the Court admitted the said T.S. Leland
to become a citizen of the United States."

A separate copy of this Certificate of Naturalization was certainly given to Torger Sjurson Leland at the time that this record was entered into the Circuit Court records above.

The Certificate above refers to a declaration of intention to naturalize given more than two years before.  I did not find any information on that declaration in the card file or in the Wisconsin Historical Society Archives.  Perhaps it is in another archive or repository.  Does any reader have any idea where it might be found?
Randy Seaver at 9:06 AM
Share