...
It's Tombstone Tuesday, and I managed to find a photograph of a final resting place that I haven't posted before. 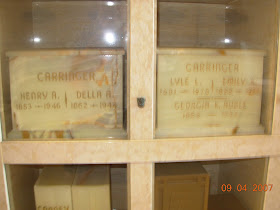 Henry Austin and Della A. (Smith) Carringer are the parents of Lyle L. Carringer, and Georgia (Kemp) Auble is the mother of Emily Kemp (Auble) Carringer.
Randy Seaver at 9:16 AM
Share