I had several comments to the blog post, and in email.  Russ Worthington and Dave Lynch suggested using Ctrl-F5 to add missing citation media.  I did that last night (several times), and some of the Citation media went into the Media file on FTM 2012 and the Media icon showed up on the Person pages.  I had not known about the Ctrl-F5 maneuver before.

Duff Wilson (an FTM 2012 developer) and Russ Worthington noted that the Media had worked for them using an iPhone and an iPad.  Russ demonstrated it in his Ancestry Member Trees, Family Tree Maker 2012, and the iPad Ancestry App post today.

Updated:  Russ asked me to attach some Media using my iPhone in the shared tree that we have, so I did.  He reported on the results in FTM2012 - Practical AP and FTM2012 TreeSync™ test.  It worked fine.

I appreciate all of the help!

Last night, the Plan workspace for my Seaver-Leland Family database in FTM 2012 indicated that my tree was not in Sync with the Ancestry Member Tree.  I tried to Sync it several times, and always got the message "The Last sync failed.  An Error occurred while "Analyzing online changes."  Please try again later."  I waited until this morning, and Russ in email suggested that I compact my file, try the Ctrl-F5 again, and then try the Sync again.  I did all of that, and the Sync still did not work.

At this point, I decided that I had a mess on my hands.  Since all of the recent additions to the file were in the Ancestry Member Tree, I went into Ancestry and deleted the link to the FTM 2012 tree.

I then used Family Tree Maker 2012 to Sync with the Ancestry Member Tree, and named the FTM 2012 tree the "Seaver-Leland Family Tree."  The Plan workspace for this new tree looks like this: 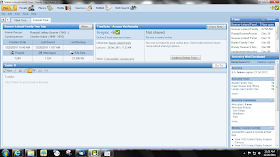 I went to David Auble's Person page, and saw the Media icons on four of the six Birth Facts, and the Media that I had added, using the iPhone, had been added to Residence Facts also: 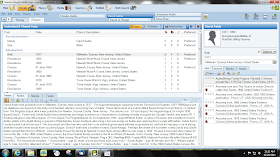 The Media workspace shows 69 Media items, including 27 items added to the database using the iPhone: 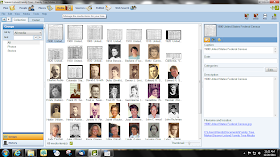 The 69 Media items are also in the My Documents/Family Tree Maker/Seaver-Leland Family Tree file folder on my computer: 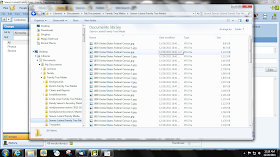 My conclusion here is that the Facts and Media items created in an Ancestry Member Tree using my iPhone downloads into a NEW Family Tree Maker 2012 database.

The next step is to add more Facts and Media items to the Ancestry Member Tree with my iPhone to see if it will Sync to the existing Family Tree Maker 2012 database.

This is important to me because if my children, siblings and cousins add content to the shared Ancestry Member Tree, I would like to be able to capture the information they add without entering their data again.  An FTM 2012 tree that won't capture all of the attached Media, or an FTM 2012 tree that won't sync with a changed Ancestry Member Tree, is not an attractive proposition, for whatever reason.  The Sync needs to work every time so that I and others can add content to the online tree, and I can add content from within FTM 2012.
Randy Seaver at 11:57 AM
Share