What is this Ancestry.com Feature Called? And more questions...

...
A Genea-Musings readers emailed me on Monday saying:

"I ask you to Google the name of one of your ancestors, perhaps an uncommon name.  One of the responses will be on ancestry.com  .  Click on that, go in, and take a look.  It is the most disgusting mess of misinformation imaginable.

"I Googled my own father, xxxx yyyy zzzz [name hidden for privacy reasons] (1906-1983).  It gives some fairly accurate information about him, but says the names of his two children are private--but includes, in his information, links to our birth records.  Not very private, eh?.
"There are "possible" photos of these people.  In the few I looked at, none of them were a match for my ancestor.
"Maybe this is a commonly known outrage, but, if it is not, please consider breaking the news to us people who care deeply about correct information."
I did as my reader suggested, but because most of my family members have appeared numerous times in my blog, it was difficult to find the Ancestry.com link she mentioned.  so I used her father's name and found it easily.
The Ancestry.com "database" page she found is http://records.ancestry.com.  Here is a screen shot of it: 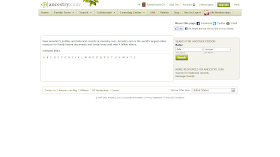 The first name I entered was "della carringer" (a married name), as shown above.  The resulting page was: 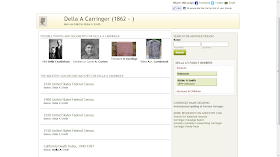 The header says "Della A. Carringer (1862 - ....  )" and provides a list of historical records on Ancestry.com, including her death record in California.  There are four pictures at the top of the listing, but none of them are for my Della Carringer.  On the right, below the search box, is a listing that shows an unknown father, a mother (Abbie A. Smith, a married name), and no spouse or children. 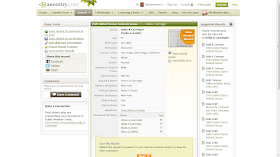 The 1920 U.S. Census record is shown, with Della A. Carringer (Della A. Smith) at the top of the record.

I searched for Della's husband, Henry Austin Carringer (1853-1946), and it found no records.  I searched for just "Henry Carringer" and got records for only "Henry Herman Carringer."  Strange...there are several Henry Carringers in the records and all of my people are well documented in at least two Ancestry Member Trees.

I clicked on Della's mother's name (Abbie A. Smith), a married name) and saw: 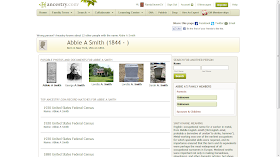 It got her birth date right, but did not have her maiden name or death date.  The birth date could have come from a census record.  The pictures shown are not hers.

What about my parents?  I put in my father's name "frederick seaver" and saw: 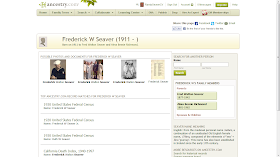 It found three pictures that I uploaded to an Ancestry Member Tree, plus a school yearbook record I've never found (it is my father's!).  It had his middle initial and his birth date, but not his 1983 death date, although it listed his death record in the links.  It listed his parents names, but not his wife and children.  It found the 1920 and 1930 US Census, plus that of his sister, Ruth.  There were several other Frederick Seaver persons in the records - why did it pick this one?

I put my mother's name in "betty carringer" and saw: 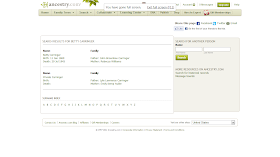 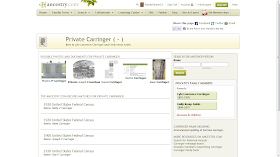 The page above is titled "Living Carringer" with no dates, with parents names, but no spouse and children.  The pictures are not of my mother.  The five links include the 1920 and 1930 census records with my mother's family, but the other three census links are not her family.
I entered "Charles Auble" and received a list of four candidates, but not my guy (1849-1916).  I clicked on one of the matches and there was a picture of my Charles that I had uploaded to my Ancestry Member Tree.
What to make of all of this?  I have some questions and comments:
*  What is this Ancestry.com "feature" called?  I'm tempted to say "a snapshot of a person who might be related to you."  Okay, I'll call it a "Snapshot" page.
*  What records does this "Snapshot" feature review?  It found census records, California death records, a school yearbook, etc.  My correspondents search yielded a state birth index with her own birth record because her father's name was listed.
*  How does this "Snapshot" feature figure out parents and children?  Does it use only historical records, or does it use Ancestry Member Trees also?  If it uses Ancestry Member Trees, why doesn't it find readily available names, dates and places for the target persons?
*  Why does it not find many persons with the same name as input?  It lists more than one possible person for several of my target names, but it didn't find my Henry Carringer.  There are three entries for that name in the 1920 census.
*  How did Della's maiden surname get added to the 1920 census summary record?  I'm very sure that I did not do it?  Did Ancestry add it based on my Ancestry Member Tree?
My observations:
*  This appears to be an effort by Ancestry.com to enable persons in Ancestry historical databases (or Ancestry Member Trees)  to be found in a search engine.
*  The "hit rate" on the names I tried was about 50%.  Some matched well, others did not match, or no records were found (for persons that I know there are records available).  Some families had a complete list of children and spouses, some families were incomplete.
*  Ancestry needs to make use of the Ancestry Member Tree data to improve the hit rate - it's there on the system, and while it is imperfect, it is better than historical records for determining names and relationships.
*  Did I miss the announcement of this "Snapshot" feature?  When was this added?  I checked the Ancestry.com blog back into September 2011 and searched for . Or is it a "beta" development feature that my correspondent just happened upon?
*  Is this feature an outgrowth of the "Person View" feature revealed in We’re launching Ancestry.com Labs – and we’d love your feedback on 18 October 2010?  It looks like it, without the helpful birth and death dates.
Thank you to my reader for telling me about this Ancestry.com feature.  It was fun trying to figure out what was happening.
The URL for this post is:  http://www.geneamusings.com/what-is-this-ancestrycom-feature-called.html
Copyright (c) Randall J. Seaver, 2012
Randy Seaver at 1:59 PM
Share