Saturday Night Genealogy Fun - How popular was your name?

Did anybody but me have SNGF last week?  I don't think so... being at a conference or seminar is no excuse!  Come on now and just do it.  Or it will go away... no pressure!

Your mission, should you decide to accept it, is to:

1)  Go to the Popular Baby Name page on the Find the Best website at http://popular-baby-names.findthebest.com/. 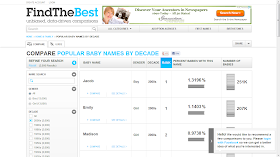 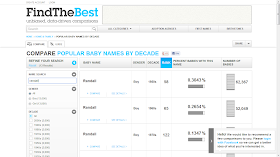 1)  I chose "Randall" and the results by decade were:

2)  I also checked "Randy" and the results by decade were:

Since I was born in 1943, my parents named me while the name Randall was on the buildup to the popularity of the name, and Randy was just starting to appear on birth certificates.