Is This How They Met? A Clue

Sometimes we know how our parents and grandparents (and earlier generations) met, and sometimes we don't.  I was told stories about how my parents met by my father's first cousin who he lived with for awhile.

I didn't know how my maternal grandparents met, and I still am not sure.  But I found a clue last night that puts them together at a specific time and place.  Lyle Carringer was born in 1891, and Emily Auble was born in 1899, so there was an eight year difference in ages.  They married in 1918 in San Diego, California.  The only common factors were that they both attended San Diego High School (years apart), and lived within three miles of each other.

GenealogyBank (www.genealogybank.com) has recently added several San Diego historical newspapers to their collection, including long runs of the San Diego Union (1871-1983) and the San Diego Evening Tribune (1895-1938).  I had not "mined" the Evening Tribune since they expanded their coverage, so I was able to find more articles about my San Diego families last night.

Here is an article from the 17 October 1916 edition of the San Diego Evening Tribune newspaper: 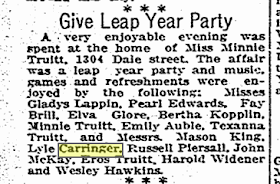 In that list of 8 females and 7 males, the names of my grandparents are put together for the first time.  1304 Dale Street is about half a mile south of Lyle's home at 2105 30th Street, and about 1.5 miles east of Emily's address at 767 14th Street.  It wouldn't surprise me if Emily was a friend of the hostess, Minnie Truitt, and that Lyle was a friend of Eros Truitt, Minnie's brother.  By this time, Lyle had graduated from San Diego High School while Emily was still enrolled there.

Could people celebrate Leap Year all year long?  What sort of games and music was played, and what refreshments were served?  Inquiring minds want to know!

One of my previous conjectures was that they met while working at Marston's Department Store in downtown San Diego.  Lyle started working there in 1905 as a "cash boy" while going to school, and gradually worked his way up to the accounting office.  Emily's mother needed income after her husband died in 1915, and I guessed that Emily might have started working at Marston's on a part-time basis.  And somehow they met.

Now, the article above provides another clue about how they met.  Lyle and Emily married on 19 June 1918 (Lyle was 26, Emily was 18), less than two years after the party.

I had never heard any of these names before.  I will have to search the 1910 and 1920 US Census records to determine the ages of these young people and their residence locations.

I love GenealogyBank!!!  It brings family history to life decades, or centuries, later!

Disclosure:  I have a complimentary subscription to GenealogyBank, courtesy of Thomas Kemp, which I greatly appreciate!  That fact does not affect my judgment or opinions about the website, or influence my postings.
Randy Seaver at 11:45 AM
Share